Noelle has been reading Irex by Carl Rackman 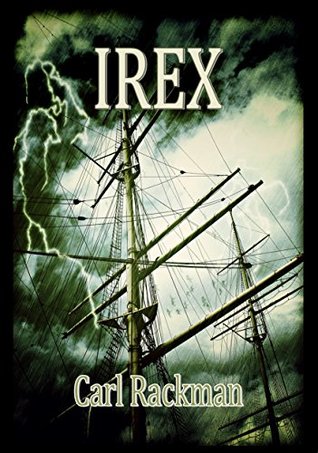 Irex is Carl Rackman’s debut novel, and in terms of creating a feeling of doom and tension in totally bleak surroundings, this author succeeds too well!

Set in the late Victorian era, the story alternates between the maiden voyage of the steel hulled, tall ship Irex, and the investigation into the causes of its wreck and the fate of the survivors amongst her passengers. The settings: The Firth of Clyde, the North Atlantic and the Isle of Wight – all in late winter with unceasing rain, snow and sleet.

Will Hutton, a good and decent married man, has been chosen to captain Irex on this voyage, the ship carrying a cargo of three thousand tons of pig iron to Rio de Janeiro. Hutton has decades of sailing experience, having served on such ships since he was a boy. In addition to the cargo, there are three passengers on Irex: Salvation Army missionaries George and Elizabeth Barstow and a mysterious man of means, Edward Clarence. Captain Hutton’s developing relationships with each of these passengers is a complex subplot, more so when he discovers that one of them hides a horrifying past and none of them are who they seem. The unending storms preventing Irex from making headway on her journey and an early death of a crew member foretells an ill-fated voyage. Lack of sleep, his physical attraction to Mrs. Barstow, challenges to his authority and blackmail all threaten Hutton’s ability to save his ship and challenge his sanity.

Irex wrecks off the Isle of Wight six weeks after sailing from Scotland, and a county coroner, Frederick Blake, is sent to the island to hold an inquiry into the cause. The inquiry is compromised from the start by the existence of a mole within the procedure, and with a disturbing lack of information and witnesses, Blake finds he himself must unravel the events dooming the ship, as well as the character of the crew and its passengers, to reach a finding. When he discovers that powerful forces within the British aristocracy are working to impede his investigation, he is more determined than ever to find out what actually occurred aboard Irex.

The atmosphere of this mystery is exceptional and the author’s attention to detail, especially in the chapters dealing with the voyage and the sailing of such a large ship, show an incredible depth of research. The ship, its crew, and their responsibilities are finely delineated – as a sailor myself, I appreciated the descriptions.

The author has created a rich Victorian world and spun the tail with colourful, unforgettable characters, weaving in intrigue and mystery. When the truth about Clarence is revealed, the plot unveils a deeper depravity – for me a light bulb moment.

My only complaint is the slow pace at which the plot unfolds. The book is dense, very dense, and there were stretches that could have been shortened significantly without affecting the content. I truly wanted to digest it all but wanted more to get to the resolution!

Mr. Rackman is an exceptional writer and this is a superb first outing – a psychological thriller, a seafaring adventure, and first rate murder mystery. I look forward to his next book.

Carl Rackman is a former airline pilot with interests in seafaring and mysteries. His reading is multi-genre – historical, sci-fi, fantasy and techno – but psychological thrillers are prime. He started writing in 2016 and Irex is his first novel. He lives in Surrey, UK.