Terry has been reading The Infinity Pool by Jessica Norrie 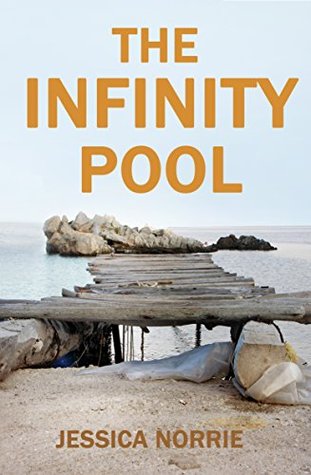 The Infinity Pool by Jessica Norrie

This was one of those surprise gems that I find now and again on Rosie’s review team list.  An unusual and intelligently written holiday drama, the story takes place on an unnamed island where the locals fail to find accord with the owners, staff and guests of Serendipity, a New Age/bohemian/back to nature type retreat.  It centres round some jagged relationships: charismatic womaniser Adrian, village girl Maria who catches his eye, Serendipity regular Alice (wonderfully obsessive and creepy!).  Then there is the effervescent Ruby who finds love with a local, female detective Chris, who isn’t quite sure what she’s signed up for, and Bernard, the creative writing teacher who is frustrated and bitter about his own inability to produce any work of note.  Eventually the resentments and incompatibilities erupt, not only between incomers and locals but between the camp residents.

The book starts with a dramatic episode, then goes back to September 2010, which sees Adrian at his lecherous best, the camp successful, but the seeds of discontent among the villagers are already sown deep.  Fast forward to June 2011, and Serendipity is all but falling apart, with key people missing, guests unhappy, and finances falling short.

The subtle characterisation in this novel is excellent; there’s a hint of mockery of the New Age claptrap in some of the guests’ silliness, and I smiled at the smugness of those who considered themselves more ‘in touch with their feelings’ than some of the newcomers (especially those who had not yet experienced the wonder of Adrian).  The comparison between the simple lives of the villagers and the spoiled Northern Europeans who aim to slough off their weight of the privilege by rather self-consciously going ‘back to basics’ is artfully portrayed.

At the dramatic end, some of the characters who were dubious about the place find that their lives have changed for the best after all, though perhaps not in the way that Serendipity intended.

Alice is an excellent character; I spent much of the novel wishing that more was being done with her, and felt some of her potential went undiscovered by Ms Norrie, but her end scenes really worked and I decided that, in this case, less was more.  The high spot the whole novel, though, is the sections from the point of view of the character who has a head injury.  So good I read them twice.  I’ve been close to someone with a brain injury and worked with some sufferers, and this gives such an insight into how it (probably) really is for them.  He has quite an adventure; it’s entertaining to read as well as being an eye-opener.

This is how to write a novel with a fair bit of domestic detail and without great swathes of thrills and spills, and still make it a real page turner!