Here on Rosie Amber’s book blog, I like to encourage reading and reviewing, so when review team member Jenni approached me about a short story project for her first year English students at University College Cork, I was eager to help.

Jenni’s students were asked to put together a mock-up of a new short story literary magazine, and then “pitch” their magazine to a panel of judges. One of the sections that they could include was a review of a collection of short stories.

Three authors kindly offered their short story collections to the students to help with this project. The books were:

The Shivering Ground And Other Stories by Sara Barkat

Over the next three days I will post the reviews.

Sara Barkat’s whirlwind of magnetic short stories in her latest collection The Shivering Ground & Other Stories introduces the reader to tales of past and future, unearthly events, and abnormalities. Written in a short-story format, Barkat intertwines alienated aspects of a futuristic world with reality, awakening feelings of hope and hopelessness, gloom, and purity. The independent short stories pose questions of what can or could be done, the majority poised at the edge of the end of the world.

Each short story is set apart, different from the other, they all meet in the centre of complex human relationships and emotions. The tales are not as straightforward, and one would often be met with confusion and questions at the end. Often the stories are quite melancholic, mind-bending, and nostalgic, which associates nicely with the surreal feel of the collection. Barkat builds unique worlds and situations in which the characters find themselves in. Aspects which seem fictitious to us in today’s world, such as hearts kept safe in a mannequin or aliens evading earth, are brought to life in this collection. Though disturbing, Barkat inserts human emotions into her tales and links the two worlds together. The contrasting settings mix with varying narratives unite the reader with the characters of the stories, whether it be by putting them in the shoes of the character, or shoes of their own.

Brianna is one of the eleven stories of the collection: it follows a sleeping maiden and her prince, Peter. However, Brianna is entrapped by roses and its thorns, and no prince has been able to cross the enchantments that protect her. There is a sense of danger and gloom that surrounds the sleeping maiden, and yet the prince of our story refuses to wander away from his supposed love. He gives her a kiss on the lips, and she wakes. The same sense of gloom continues as the now awaken maiden desperately apologises to the prince, assuring him that he would soon regret that he had woken her up in the first place. His parents try dragging him away from Brianna, claiming that it is not safe to be around her. Just like the other stories in the collection, Barkat encourages the reader the think of the possible messages and morals of the tale. Brianna can be compared to The Sleeping Beauty in some sense, but with a darker perspective. One may also compare it to hopeless relationships, where one person is overtaken by depression, and yet the love interest is convinced that they can take the person out of the pitch-black pit, unaware of the dangers that it might bring to them.

If you wish to analyse these short stories on your own, I encourage you to do so! This is only one example of Sara Barkat’s new short story collection, The Shivering Ground & Other Stories, and there is plenty more that she has to offer! (4/5 stars)

Plant them they will grow

Watch them waver so

I’ll always be a word man

Better than a bird man

Per his end of collection “Author’s Note” Leonard “believe[s] a story, even a short one, deserves some sort of prelude. Something to ease the reader into what will hopefully be a memorable and enjoyable experience.” Taking my lead from him, this review (short as it is) gets a snippet of Morrison, a personal favourite when it comes to poetry and performance, and a soul that might just be twisted enough to mesh with Leonard’s personal brand of irony and horror. Of course, the above-mentioned author’s note is itself just the prelude to one final entry into The Dead Boxes Archive, one last story about deals struck, promises made, and promises kept in the most perverse ways possible.

I have a feeling Morrison might have appreciated that too, but let’s not make this a complete digression into dead rockers and the hauntings they left behind.

John Leonard’s The Dead Boxes Archive is a series of loosely connected stories, most centring on a “dead box”, objects of eldritch power that give and takes with a set of unbalanced scales. Whether the box is stadium shaped, a township that sits just off kilter from our dimension, or a pen that is indeed mightier than the sword, Leonard’s boxes haunt both the owners who hold them and the readers who watch this unfold. Each story is a realm unto itself, but those looking for connective tissue beyond the general theme of cursed objects acting like cursed objects, will find a deeper plot echoing across the background of Leonard’s tormented landscape. Are the end times nigh? Haunted cults and beings from another realm afoot? Or merely a presence from the past lingering well into the here and now? Bate your breath and batten down the hatches, a phone with no guts is ringing and a pen with no ink is writing this story— The Dead Boxes Archive awaits you.

I recently asked author John Leonard how the current Covid19 crisis might affect horror and apocalyptic writing, and he kindly agreed to offer us his thoughts. 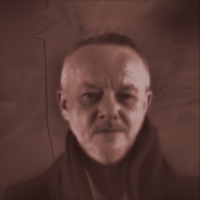 These are very strange times. The news is a daily bombardment of death tolls and dire warnings. It feels as if dystopia has jumped off the fictional pages and become our reality. Asking whether COVID-19 will fuel horror and apocalyptic writing may seem like a rather insensitive question, given the circumstances, but it’s not meant that way. Think of it as just another little distraction when any distraction is welcome. Even for those of us untouched by tragedy, this is an odd and disconcerting period. It gets you thinking. I was pondering an aspect of the coronavirus crisis which relates to writing. The impact on certain genres within the writing community. In particular, how it might influence horror and end of the world stories.

I talk to a fair few writers in the horror and apocalyptic/post-apocalyptic fraternity. The recent tone of these conversations echoed my own thoughts. The things which infatuate us, niche in many ways, have gone 24hr media mainstream. It raises difficult questions. How you deal with that as an author? Do you shamelessly promote your old stuff? Does the situation make the current work in progress redundant? Is it ethically acceptable to put out an apocalyptic story in this climate?

My take is positive, on the whole. Will COVID-19 fuel horror and apocalyptic writing?

There’s evidence of increased interest in this type of literature at the moment, both amongst readers and writers. Understandably so. Coronavirus lends apocalyptic tales added credibility. The absurd is far less absurd when you experience a diluted version of it as your reality. This appetite will grow after the present crisis has passed. We’ve been given a scare and we read and write about what scares us. It’s a way of coping with the fear. There have been similar instances in the past. The prospect of nuclear Armageddon in the Fifties, for example. That produced an explosion in horror and science fiction. Films and books about disaster and catastrophe. Monsters and aliens which threatened life as we know it.

I might be wrong, but I think this could be comparable. New classics will be born and some neglected gems gain recognition. Don’t get too excited if you’re a PA author, far more of those underrated apocalyptic pearls will probably remain ignored. I also suspect COVID-19 will spawn some truly inventive thinking about apocalyptic scenarios and tighten the weave of horror into the underlying narrative of other genres. On a negative note, there’s a pretty good chance we’ll be swamped with previously unknown levels of crap. A new wave of bad indie. People with time on their hands and imaginations fired by visions of societal collapse will turn to the keyboard and give it the good old college try. That sounds like I’m dissing indie. Not the case, it’s one my great loves. You have to be honest though.

Publishing and promotion isn’t an issue. Write about whatever you want and promote what works for you. If it has merit, you’ll find an audience. The basics of writing don’t change, irrespective of era or setting. Telling the tale well never gets old. A good story is a good story.

It’s perhaps worth mentioning that my own preference for reading (and writing) has always been horror and apocalypse. An inclination which isn’t easily explained. They’ve captivated me ever since I was old enough to buy paperbacks for pennies from some long gone second-hand bookstore. No idea why I’m so entranced. Maybe it’s because my mom let me stay up late and watch Hammer Horror when I was a kid. I could blame Stephen King for writing The Stand. Who can say? Sometimes we simply like what we like, I suppose.

Which brings me back to the question. The horror and apocalyptic genres have attained an enduring status. They’re not going away. People like me gravitate to them without any apparent reason. Rest assured, COVID-19 will only serve to fuel the interest. It may well usher in a golden age.

John was born in England and grew up in the midlands where he learned to love the sound of scrapyard dogs and the rattle and clank of passing trains. He studied English, Art and History and has, at different times, been a sculptor, odd-job man and office worker.