Went to Mark Barry and his book The Night Porter

Mark Barry, author of Hollywood Shakedown, the highly acclaimed Carla and the top selling Ultra-Violence, is a writer and publisher based in Nottingham and Southwell. He writes extensively on a variety of topics including, horseracing, football, personality disorders and human relationships, but most recently, he writes about life in Nottingham and monitors closely its ever changing face.

Mark resides in Southwell, Nottinghamshire and has one son, Matthew.

Set in a hotel, in November, in the fictional town of Wheatley Fields, (based on Southwell, near Nottinghamshire, deep in Sherwood Forest).

Four writers, all nominated for an upcoming awards ceremony, come to stay.

One mega successful romance author, a top US thriller writer who sells in seven figures, a beautiful young YA tyro on the brink of world wide stardom…

The Night Porter is instructed by a secretive and powerful awards committee to look after their EVERY need, to ensure they make it through the two weeks to attend the ceremony. At the same time as keeping an eye on their wishes, antics, fights, relationships and never-ending ego explosions. And trying desperately to avoid getting involved himself.

It’s a comedy drama about writers (and Night Porters!) with twists and turns, nooks and crannies, shadows and mirrors.

I don’t think you will see an Indie published book like this anywhere in Cyberspace.
Probably not a tradpubbed one either.

It casts a sometimes shadowy light on modern publishing, the writing business – and the people in it. Writers who like to read about writers and writing will enjoy the book as will readers who enjoy innovative, clever and multi-layered fiction.

Terry Tyler is fascinated by the psychology behind personal relationships, which is why she writes character-driven contemporary dramas. From the rock star aspirations of the lighthearted ‘Dream On’ and ‘Full Circle’, to the dark and complex psychological web of her latest publication, ‘The House of York’, it’s all about the characters, though she loves manufacturing unguessable plot twists, too. Watch out for ‘Bestseller’, a novella about three writers, due out around March.

She has a blog on which she writes about anything from observations about social networking trends, to self-publishing hazards, to anything else that comes into her head, and is currently running a feature about writers and astrology. The link: http://www.terrytyler59.blogspot.co.uk/ . This year she started a new book review blog; on this you can find her own reading choices and those she reads as part of Rosie Amber’s Book Review Team. She loves Twitter (TerryTyler4) and can also be found on Goodreads and Facebook.

Terry lives in the north east of England with her husband; when she is not writing she escapes into Netflix and history books/documentaries, or floats around the house spraying Guerlain perfume, listening to old jazz and blues and pretending she’s in ‘Boardwalk Empire’.

LAST CHILD is the sequel to Kings and Queens, Terry Tyler’s modern take on the story of Henry VIII and his six wives.

Harry Lanchester is gone, his legacy passed on to his children:

Thirteen year old JASPER, who views the directors of Lanchester Estates as Harry Potter characters, and finds out that teenage love affairs are no fairytale.

ISABELLA, the eldest daughter; lonely and looking for love, she returns from a holiday in Spain with more than just a suntan.

Impulsive, independent ERIN, the girl of Transport manager Rob Dudley’s dreams, whose priority is not a husband and family, but the continuation of her father’s work.

You will also meet the ambitious Jim Dudley, ex-nanny Hannah Cleveley, Rob’s long suffering wife Amy, and Raine Grey, whose nine days as PR manager for Lanchester Estates have a devastating effect on her life.

LAST CHILD takes the drama, passion and intrigue of Kings and Queens into the present day, with echoes from the past ~ and a glimpse or two into the future…

Final congratulations to all the Contemporary nominees.

Tonia Parronchi with THE SONG OF THE CYPRESS

Dena Haggerty with JACK GETS HIS MAN

Today’s review comes from E.L Lindley, she blogs at http://lindleyreviews.blogspot.co.uk/

E.L read Jack gets His Man by D.E. Haggerty 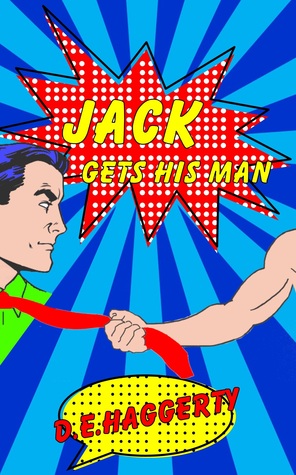 I have to confess that I am a bit of a novice when it comes to cosy mystery/romance but I was attracted to this novel by the idea of a gay male romance written by a woman. Jack Gets His Man is the spin off sequel to Murder, Mystery & Dating Mayhem and, although there are lots of references to what’s gone before, it works very well as a standalone.

With Jack Gets His Man, D. E. Haggerty has indeed created a cosy world, where everything is more or less perfect. Jack is best friends with newlyweds Izzy and Noel, who are so supportive that Izzy even comes to collect him in the early hours of the morning after an illicit hook-up with an ex-lover. Jack is constantly popping around to Izzy’s house and not even the fact that he caught her and Noel in flagrante delicto can deter him.

The plot develops as Jack realises that money is being embezzled from his shop – a cross dressing/plus size ladies wear store called ‘Fabulous Darling’. Izzy, Noel and a geriatric knitting club band together in order to investigate who is siphoning off the money. They are eventually joined by Damien, Jack’s recently appointed bookkeeper and love interest.

The key to enjoying this novel is to suspend all reality and just go with the flow. The story is set in a small town in Oklahoma, where it seems anything goes. Criminals aren’t all that dangerous and drop dead gorgeous gay men abound, with barely a whiff of homophobia anywhere. That said there is something delightfully addictive once you allow yourself to get caught up in the mad-cap shenanigans of Jack’s life and, I literally couldn’t put the book down, reading it in one sitting.

Jack is the product of the constraints that the ‘cosy’ style dictates. He is stereotypically camp, playful and of course impossibly good looking. He is shallow to the point that he defines everyone he meets by how attractive they are but he is a devoted friend and takes good care of the knitting club ladies. There are hints of darker tones when Haggerty lets us know that Jack’s family disowned him for being gay and when we see him struggling to come to terms with his upcoming fortieth birthday but, in keeping with the light, frothy style, these issues are never really pursued.

I really like the fact that Haggerty uses her novel to give older people a voice. The knitting club ladies are hilarious – quick witted, saucy and not to be messed with. Despite being a great grandmother, Rose, a former accountant, is able to trace the missing money trail and is pivotal in solving the crime. Izzy is on the wrong side of forty and yet is a vital, fun loving character. Haggerty is able to effectively show how age is irrelevant when it comes to engaging with and enjoying a story.

Jack Gets His Man is the perfect antidote to the stresses of real life, offering an alternate reality in the style of a fun sit-com. It would make the ideal beach read and any reader wishing to while away a couple of hours with a funny, entertaining romp, can’t go wrong with this one.

Today’s team review comes from Karen, she blogs at https://mytrainofthoughtson.wordpress.com/

Karen chose to read and review Jack Gets His Man by D.E. Haggerty

This book focuses on Jack, restless due to his upcoming birthday, no current lover, and inexplicably decreasing business profit.

With Jack Gets His Man, D. E. Haggerty has created an expertly worded and pretty funny suspense story with a romantic touch. The story comprises a broad variety of characters with sufficient depth, hilarious moments and interesting interactions to solve the case of the vanishing finances. I had a great time reading Jack Gets His Man – it is a very fun read. I was drawn into the story right away, chuckling about the cute gray-haired knitting detectives and their ways, seconding Izzy’s thoughts, trying to find the culprit and hoping that Jack really gets his man. This is for you if you like female sleuths, hilarious situations as well as a great combination of (cozy) suspense, humour and romance.

A funny and suspenseful book to read again.