Terry has been reading Hometown Boys by Mary Maddox 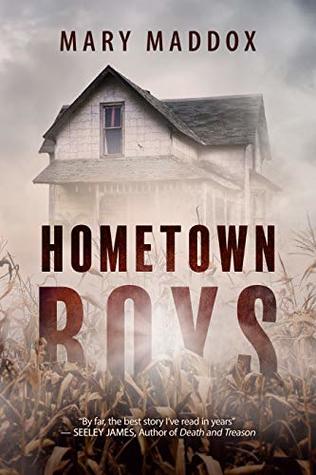 I liked this book a lot.  It’s listed under crime/mystery and women sleuths, and the plot is intricate, convincing and interesting, but it was the characters and relationships between them that kept me turning the pages without being tempted to skip-read.

Kelly Durrell returns to her hometown of Morrisson in Illinois when her aunt and uncle are brutally murdered, supposedly by her ex-boyfriend, Troy.  Although he has confessed, some people think there is more going on behind the scenes, and that Troy was merely a hired hit-man.  This storyline is interspersed with complications within Kelly’s own family; gradually, the two intertwine.

The book begins with the murder, when Troy is egged on, and it is clear that others had an interest in what he is about to do, but as the story unravels it becomes clear that there is far more to it.  Mary Maddox paints the picture of claustrophobic, small-town life so well, from the depressing existence of Kelly’s blinkered mother, to the criminal trailer trash, to the old schoolfriend who wanted to be a model but is now an overweight housewife.  In Morrisson, everyone knows everyone else’s business and, more problematically, makes immediate and often uninformed judgements about it.

This is the sequel to Dark Room, which I read and reviewed for Rosie’s Book Review Team back in 2016, i.e., so long ago that I might as well not have read it (I have a shocking memory), but this did not hamper my enjoyment or understanding of the plot.  There are a few instances in which it is clear that there was a book preceding this one, but enough information is given, in a concise fashion, for there to be no doubt about what is going on.  It might have been a good idea to put a recap in the front of the book, though, all the same.

The novel has a neat ending, with all threads tied up except one, that is left dangling…. for Book 3?  Nice one, I recommend.

Sometimes going home is the most dangerous thing you can do.

Junkie burnout Troy Ingram murders an elderly couple outside small-town Morrison, Illinois. He’s supposed to make it look like a robbery, but there’s so much blood he panics and flees. When he’s caught by police, he falls back on Plan B: tell everyone who will listen his motive was revenge on the Durrell family.

See, twenty years ago, Kelly Durrell broke his heart and ruined his life.

When Kelly returns to Morrison for the funerals, leaving her life in Boulder still packed in boxes and her relationship with detective Cash Peterson in its infancy, local gossip is quick to reach her. Troy’s story doesn’t make sense, but everyone in town seems happy to blame Kelly.

She can’t even turn to her family for consolation: she and her mother get in an argument every time they talk, her dad doesn’t want to make waves, and her cousins are too busy fighting over their inheritance to care about anything else.

But Troy’s lawyer, Lizzy D’Angelo, is sure someone forced Troy to commit the murders, and that Kelly is the key to finding out who. With Lizzy’s help, Kelly starts digging. Soon she discovers just how many secrets a small town can hide.

Can Kelly shine a light in her hometown’s dark corners without getting herself and her family killed?

Hometown Boys is a smart, tension-filled thriller that will keep you riveted until the surprising, satisfying end.