The Duke and The Enchantress by Paullett Golden

The book is set during 1790 in Northumberland. The story opens with newlyweds Charlotte and Drake, as they travel home from London.

With only a month of courtship before their hasty marriage, Charlotte is anxious about the future. She realises that the couple know very little about each other, and she is frightened about what she may be expected to undertake in her role as Duchess.

Upon arrival at Drake’s home, Lyonn Manor, Charlotte is introduced to his mother, a woman who makes it very clear that she disapproves of her son’s choice of wife. Feeling lost, alone and bullied by Drake’s dragon like mother, Charlotte almost despairs that she will never achieve the type of married life that she once dreamed of.

Readers of the series were introduced to Charlotte and Drake in book one; now we get to see them in a flip-side setting. If you’ve read book one, like me, you may have already formed your opinions of them. This book, however, shows a very different side to the couple. We get a chance to understand their characters deeply. I’m pleased with how my impressions changed between the two books; I quite disliked them at times in the first story, so this is a clever turnaround.

There’s also a musical sub-plot which works well, particularly with how the author linked it to the whims and fashions of society. It brought an unusual element to this genre. I’m enjoying this series, and am hoping that Drake’s sister will get to star in her own story very soon.

Some fairy tales begin with the kiss.

​Drake Mowbrah, the Duke of Annick, needed a wife. After choosing an acceptable bride, he traps himself in a marriage of convenience and must tap his creativity to woo his frigid wife and fuel her passion. Drake battles scandals, duels, and his own carefully crafted reputation to win her heart.

Charlotte Trethow dreamt of a fairy tale marriage to the perfect man. When she marries the Duke of Annick, all her dreams should have come true, but no one told her happily ever after doesn’t start with wedding bells. Charlotte is thrust into a world with a plotting housekeeper, an interfering despot, and an unconventional husband.

This is the love story of Charlotte and Drake as they turn a marriage of convenience into a fairy tale romance.

Lady Cecily and the Mysterious Mr. Gray by Janice Preston

Lady Cecily And The Mysterious Mr Gray is a Regency romance and book #3 of The Beauchamp Betrothals series.

Thirty year old Lady Cecily attends the marriage of her brother Vernon. He is the second family member to find love in recent months. The wedding atmosphere is beautiful, but makes Cecily feel disheartened about her own future prospects. She fears she will become the spinster aunt; always the companion, but never the one with a family of her own.

Lost in thought, Cecily is unaware of the wedding guest seated next to her in the church. Mr Gray (later to be known as Zach) is the man who recently saved the life of the bride’s brother. They meet later in the gardens, where Gray sees through Cecily’s inner turmoil. Their conversation flows easily and Cecily find herself opening up about her fears.

Zach is half Romany and his social label has moulded the man he has become. Currently he chooses to live freely, putting a troubled past behind him. But he can’t get Cecily out of his head. However, they can never be together unless he claims his true ancestral rights, but first he must fight for Cecily and face past torments.

This book can be read as a stand-alone; however, to get the most from the series I recommend reading them in order. This way, the reader will have a good understanding of the secondary characters, which will improve with the overall experience. I do like this author’s work; there are always some unusual characters or animals which add to the storyline, making it a memorable read.

Love or family…How can she choose between them?Lady Cecily Beauchamp has always put her family first. Until she falls under the spell of the mysterious Zachary Gray–a man of Romany descent. Knowing her family will forbid their match, Cecily steels herself to do her duty and marry someone else. Only she finds herself irresistibly drawn to Zach as the spark between them ignites a passion neither can deny!

I’m Janice and I’ve been writing emotional, sensual and satisfying Regency romances for Harlequin Mills and Boon (HMB) Historicals since 2014. I love to write books with linked characters, so you’ll often find old friends popping up in my stories!

A Warriner to Seduce Her by Virginia Heath

A Warriner To Seduce her is book #4 of the Wild Warriners historical romance series. It is set in London in the early 1800s.

Jake Warriner is a member of the king’s elite covert operatives, created to infiltrate organised smuggling rings. His latest assignment is to seduce the niece of Crispin Rowley, and gain information of Rowley’s business activities. With his reputation as a rake, this should be the perfect job. However, Jake is unprepared for Felicity, a school mistress who can see right through his public persona and who refuses to fall for his usual charms.

Felicity’s own investigations find evidence that the king’s men couldn’t, but will this come at too high a cost for the friendship which has been blossoming?

I’ve read all the books in this series and thoroughly enjoyed them, they can be read as stand alone books, but I would recommend reading them in order. Ideal for anyone who likes Harlequin’s (Mills And Boon) historical romance range.

Awakened by the notorious rake!

In this The Wild Warriners story, schoolmistress Felicity Blunt feels old beyond her years—and desperately dull. Meeting confirmed rake Jacob Warriner brings her gloriously to life, yet no matter his allure, she must remain immune to his obvious charms and unashamed flirtation. But is Jacob merely a mischievous scoundrel, or is there much more to this Warriner than meets the eye?

After spending years teaching history, I decided to follow my dream of writing for Harlequin.

Now I spend my days happily writing regency romances, creating heroes that I fall in love with and heroines who inspire me.

When I’m not doing that, I like to travel to far off places, shop for things that I do not need or read romances written by other people. 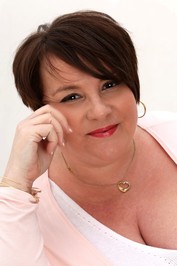