The 2015 Golden Rose Book Award for Romance went to

I can’t remember a time when I wasn’t writing, and my ambition was always to be a published author. I write contemporary romance, because that’s what I like reading the most. In January 2015 I was thrilled to win the Accent Press & Woman Magazine Writing Competition with my debut novel ‘French Kissing.’ I love travelling and I’m inspired to write by the many wonderful foreign cities that I’ve visited and explored , with a camera and writer’s notebook in hand – Rome, Milan, Barcelona, Madrid, Venice, New York, Copenhagen, Berlin and of course Paris, the city which inspired me to write ‘French Kissing’

Anna Mitchel has been writing letters to her French penfriend, Alexandre Tourville, for fifteen years, but hasn’t seen him since an exchange trip when they were at school. But when Alex, now a successful photographer, has the opportunity to work in London, Anna offers him a place to stay but is astounded that the small, geeky boy she remembers is now tall, broad-shouldered and gorgeous, and has just broken up with his long-term girlfriend.

Anna’s female friends are soon swooning over Alex’s Gallic charm, and Anna’s boyfriend Nick is becoming extremely jealous of their friendship. Then Alex has to return to Paris to oversee the hanging of his photographs in an exhibition, and invites Anna to accompany him so that he can show her the city he adores…

Patricia Sands and her book The Promise of Provence

Patricia Sands lives in Toronto, Canada, when she isn’t somewhere else. An admitted travel fanatic, she can pack a bag in a flash and be ready to go anywhere … particularly if it’s the south of France. Most winters are now spent in south Florida.

Patricia’s published novels include: The Bridge Club (2010) and the Love In Provence Book Series ~ The Promise of Provence (Book #1 – 2013) and Promises To Keep (Book #2 – 2014). She has been signed to a contract with the Lake Union Publishing (women’s fiction) arm of Amazon Publishing.

Her award-winning debut novel The Bridge Club was a finalist in the Foreword Reviews 2010 Book of The Year (general fiction), 2011 Next Generation Indie Book Awards (First Novel) and 2012 Indie Excellence Book Awards.

With a happily blended family of seven adult children and, at last count, six grandchildren, life is full and time is short. Beginning with a Kodak Brownie camera at the age of six, she has told stories all her life through photography and is seldom without a camera. When time permits, sports are also a big part of her life.

Patricia is also a sought-after speaker with women’s groups. Her messages inspire women of all ages to believe in themselves and to develop the confidence to pursue their dreams. She feels that life offers opportunities no matter what our age. A strong advocate for the importance of friendship, her writing and talks stress the value of the connections women make in their lives and how we are able to empower each other.

With a focus on women’s issues and aging, her stories celebrate the feminine spirit and the power of friendship. Her passion is bringing her message of motivation and inspiration to encourage women to value their stories and to find the strength within to approach every challenge as an opportunity.

Also a Flash Fiction Finalist (Winter 2010) with Women on Writing, her work was recently included in the anthology “Canadian Imprints” published by the Writers and Editors Network. Her travel writing can be found on the The Good Life France website and in her popular Friday blog, “If it’s Friday, it must be France…” which can be found on her website.

On the evening of her twenty-second wedding anniversary, Katherine Price can’t wait to celebrate. But instead of receiving an anniversary card from her husband, she finds a note asking for a divorce.

Fifty-five and suddenly alone, Katherine begins the daunting task of starting over. She has her friends, her aging mother, and her career to occupy her, but the future seems to hold little promise—until, after a winter of heartbreak, Katherine is persuaded to try a home exchange holiday in the South of France.

In Provence, bright fields of flowers bloom below medieval hilltop villages with winding cobblestone streets. Charmed by the picturesque countryside, the breathtaking Côte d’Azur, and the enchantment-filled boulevards of Paris, Katherine feels life opening up once again. Lavender perfumes the air, and chance encounters hint at romance and passion. But memories of heartbreak and betrayal linger—and her former life waits for her back home. Can she find the courage to begin again?

Final congratulations to all the Romance nominees.

Helen Pollard with HOLDING BACK

Emily Arden with LOVERS BY MOONLIGHT

Terry chose to read and review The New Mrs D by Heather Hill. 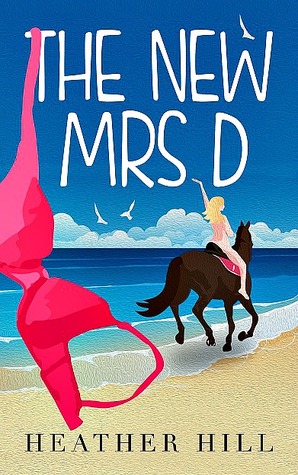 Bernice decides she can’t take it any more, and will spend the rest of the holiday alone. She meets up with David’s friend Chris, an artist who lives nearby, and makes several new friends.

This is a smart, well written, lighthearted-with-serious-undertones sort of book, and I enjoyed the Greek holiday atmosphere. I thought the whole subject of Bernice’s dilemma was most interesting; her relationship with her mother that led to the low self-esteem, that led to her making a first unwise marriage, then becoming a Facebook ‘friend’ of the woman for whom Husband #1 left her, and, finally, marrying a man who didn’t want to sleep with her. I think many women would be able to relate to Bernice’s tendency to ‘people please’, which in itself had a detrimental effect on her self-esteem, but I wondered if the story might have been better suited to a slightly edgy, contemporary drama, rather than chick lit mode, with all its zany incidents – I do sometimes wonder if anyone’s ever written a chick lit heroine who isn’t ludicrously accident prone!

I was pleased that the ending wasn’t predictable (I liked it alot, it made me smile!), and I thought the message of the book, about learning to love and accept yourself, was sincerely and sympathetically executed. The whole thing was a bit too ‘whoo-hoo, you go girl, let’s all be sassy real women’ for me (and a bit too naked), but that’s only personal taste; Bernice and her new friends were appealing characters and I think this book will appeal to many women. I can imagine it being an inspiration to others caught in the low self-esteem trap; haven’t most of us been there at some point?

The New Mrs D by Heather Hill
My rating: 4 of 5 stars

Bernice decides to take hold of her own destiny in a Shirley Valentine moment and stay in Greece finding adventure amongst new friends and nude karaoke whilst updating her facebook page for the benefit of those back home. But when the honeymoon holiday comes to an end will she take Mr D back or continue with her new found life?