Harbinger is a dark fantasy tale set in a vast castle filled with members of the Harrow family. As each male descendant reaches the age of twenty-one he must compete against the Harrowlord; most perish. Willem is desperate to find a way to survive the ordeal, and his search for an answer takes him deep into the bowels of the building where horror awaits.

The setting has a medieval tone. The short chapters each begin with a secondary narrative in italics, the idea being to give some outside perspective to the castle setting, but each time I found it took me out of the central story for too long a period.

The writing style is beautifully atmospheric, elaborate and showed off the author’s extensive vocabulary, but I felt it suffered from being over-written. I found it hard to find the story hidden behind all the adjectives and adverbs; it seemed that he chose not to use three words if he could stretch each sentence out to ten, which slowed the plot. It’s a shame because the writing itself and the storyline are basically very good, but areas of tension were diluted by the wordiness.

There were several intriguing characters with historical stories and backgrounds that I was eager to learn about in lots more depth, but in order to do so I did rather feel as though I had to plough through so much that was unnecessarily descriptive.  I see this is his debut novel and the first in a series; I would advise seeking a professional manuscript assessor/editor’s point of view before publishing the next episode.

Born into a feared royal family, and a bastard son of the infamous and immortal Harrowlord, Willem Harrow has proudly limped his way through the halls of the Hiltkeep his entire life. Within polished stones that more resemble a giant’s broadsword than a true keep, lies are the building blocks of discussion… and ancient history bleeds into the present in more ways than Willem could imagine. This secrecy extends to the most pondered mystery that the Hiltkeep houses: the Harrowlord’s motivation for famously, and on every birthday without fail, challenging his 21-year-old sons to a brief but deadly duel.

Despite his unwavering respect for the Harrow name, Willem has ever been at odds with his father. However, it seems that may change when he’s entrusted with a special task: rooting out and beheading a traitor whose ideals he secretly embodies. But Willem’s desperate plans could easily crumble around him even as he questions the very history he was taught; at the precipice of his understanding, an ancient evil lingers, eager to flourish once more…

Harbinger is the first book in The Harrows Series, and C. F. Bellairs’ debut novel. This is a dark fantasy story with adult language and scenarios, and is not intended for children. 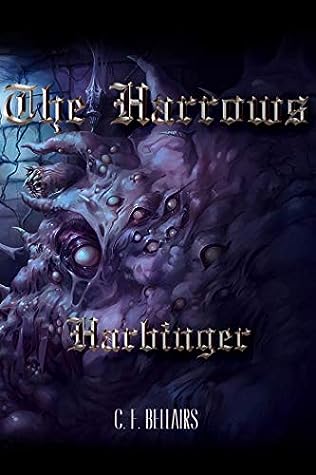