Sandra has been reviewing Hands Off by D.E. Haggerty 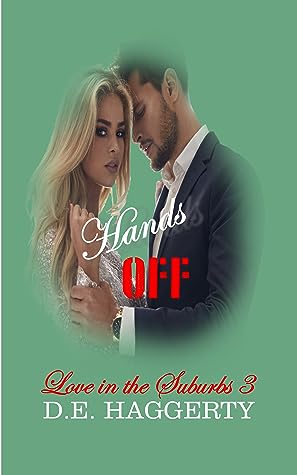 Hands Off is the third in the Love in the Suburbs series, but I did not enjoy it as much as the previous two. I found the character of Roman Cadwell to be a bit two-dimensional; I can’t quite put my finger on it but something was missing. There was too much emphasis on Roman’s wealth and not enough on his character. He just didn’t convince me that he was a real person, and at times he was overly forceful; he was aptly described as a ‘bulldozer’ at one point. This was not a problem in the first two books where the characters came across as very believable.

Bailey seemed to be unable to forgive herself for what had been a genuine error of judgement; she put up a bit too much resistance, once the truth had been uncovered, to the idea of dating Roman even though they were really attracted to each other.

Frankie’s grandma was her usual delightful self, determined to bring Bailey and Roman together no matter what. I imagine it would not be so much fun being on the receiving end of her matchmaking. I liked the strand where Bailey got to know her father; it was sad that it had taken so long for them to find each other. What a piece of work her mother was – I don’t want to give anything away, but I don’t understand how anyone could treat their own daughter that way?

While you could read this as a standalone, it would be a much more rewarding experience to start at the beginning, and I’m glad I did. The next in the series, Knee Deep, is Luke and Violet’s story, and I’m very much looking forward to finding out what happened to make them so antagonistic towards each other. Thanks to the author for a copy that I review as a member of Rosie’s Book Review Team. #RBRT #HandsOff #DEHaggerty

I don’t care how much billionaire Roman Cadwell pushes (and, oh boy, does the sexy man push ALL my buttons), I am not dating him. Especially not when he’s wearing a golden band around his ring finger. I do not get involved with married men. Call it my line in the sand. If a man can’t be faithful, I want not one single thing to do with him.

But what if Roman isn’t really married? What then? No, no, no. I will not fall into Lying McLiarson’s trap.

Only every time the man touches me, my body forgets I’m a good girl and wants to give in. Hands off, Mr. Lying Pants, before I forget I’m a good girl.

Although – no one said I had to be a good girl forever.