Today we have a review from our teen reviewer CookieBooker who blogs at https://cookiebookreviews.wordpress.com/

Cookie chose to read and review Guardians Of The Dead by S.L. Wilson 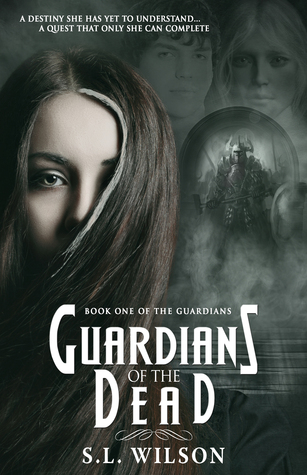 When sixteen-year-old Amber Noble’s dreams begin to weave into her reality, she turns to the mysterious Connor for help. His links to the supernatural world uncover a chilling truth about her hometown and a pact that must be re-paid with blood.

As her father alienates her, and the Guardians take her best friend, her true destiny unfolds, and she begins a quest that will see her past collide with her present.

Drawn deeper into the world of witchcraft and faeries, it is only at the end of her journey that she realises how much she could lose.

Guardians of the Dead delved deep into the fantasy world with characters that tug on your heartstrings and show emotion deeply.

The action in this book kept me hooked from the beginning. The difference in personalities and the way people can change really show in this. You definitely see the development of Amber from Page 1.

I am a lover of Fantasy and Dystopian novels so Guardians of the Dead fits me perfectly. I love the way the chapters split the storyline and the way relationships change.

As for the characters, Amber holds a strong friendship with her best friend, Tom, who have gone through everything together. Patricia’s actions and speech create an instant disliking and really makes you feel for Amber. Connor can understand what Amber is going through and is always there to comfort her.

The cover for this novel is intriguing as it is mostly grey, Amber’s unique strand of silver in her hair is highlighted very clearly and the title’s colour is white, making it noticeable. Due to the cover having this colour scheme, the interest for the book is immediate.

I would recommend this book for teens and up without a doubt.

Barb chose to read and review Guardians Of The Dead by S.L. Wilson

Shelley Wilson, best-selling author of self-help/motivational titles such as How I Changed My Life In a Year: One Woman’s Mission To Lose Weight, Get Fit, Beat Her Demons, And Find Happiness …In Twelve Easy Steps! has just released her first novel, the YA fantasy, Guardians of the Dead (Book 1 in her Guardians series).

In this magical-girl coming-of-age story, Wilson pays often-loving tribute to almost every trope I associate with the genre:

Guardians of the Dead is a fast-paced, breezy read. Amber is an occasionally snarky but (also occasionally) kickass heroine. It’s completely unlike me to say this, but I’d like to have seen it go a bit darker and lots longer. There are hints that aren’t developed. For example, General Losa has imprisoned Redka’s mother, a beautiful fairy queen. At first it’s just because he wants her to make him immortal, but we’re told that he falls in love with her. I’d like to have seen some evidence of that, some inner conflict that is perhaps a step away from the black-and-white of good vs evil. Also, there just isn’t time to develop the emotional side of the love triangle, so we have to accept Amber’s word for her overwhelming attraction to both Connor and Redka.

A big part of every girl’s story is her relationship with her mother. But Amber never seems more than slightly annoyed about being abandoned by a mother who seems perfectly willing to consider others’ needs as more important than those of her own daughter. Finally, for a coming-of-age story, there isn’t much character development or growth. Amber does change a bit, mostly through the acquisition of conveniently useful magical gifts. Tom shows signs of stepping up his role from adorable to kickass wannabe sidekick, as does Connor. Sadly, Redka remains cardboard thin, as do the fairy queen and assorted parents.

BUT (and this is what brings this story up from three to four stars) Wilson does a very good job of giving this story arc its own ending, while still leaving plenty of loose threads to tie up in future instalments. I’d give this little book an enthusiastic four stars, and say that I’m looking forward to seeing growth in future volumes.