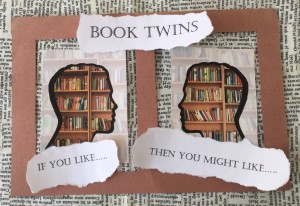 When you’ve read a book, do you sometimes find yourself thinking “oh, that really reminds me of *insert name of another book*”?

Welcome to a new feature, in which my team and I make reading suggestions based on your favourites, be they classics, or newer best sellers.  Our recommendations consider not just genre, but writing style, plot—and that ‘feel’ you can’t quite put your finger on.

This week’s choice is from team member Cathy:

If you liked The Dry by Jane Harper, then you might like The Silent Kookaburra by Liza Perrat

The Dry is set in small town Australia as is The Silent Kookaburra. They both benefit from strong characterisations, an atmospheric setting and sense of place. Both deal with family secrets and multiple issues.

The Silent Kookaburra opens with Tanya packing up her parents’ home after their deaths. An old newspaper cutting her grandmother saved brings memories rushing back and, despite her uneasiness and resistance, pulls Tanya back to the sweltering summer of 1973 and her eleven year old self. The story is narrated from Tanya’s perspective in the third person. She is overjoyed at the birth of her baby sister, after multiple miscarriages suffered by her mother. The family, along with Nanna Purvis, live in Gumtree Cottage, Wollongong, a small town in New South Wales.

Written extremely well with wonderful, distinct characterisations and incredible imagery, this is a poignant story driven by cause and effect, the characters’ reactions completely convincing. Dealing with sensitive subjects, abuse, post-natal depression and grooming amongst others, it’s sometimes difficult to see things through Tanya’s eyes. There’s so much she doesn’t yet understand or isn’t able to express but the reader can see where certain situations are heading, sharpening the suspense and the sense of danger, while dread of the likely end result builds.

It wasn’t hard to become immersed in the story, the sense of time and place is intense and the mindset and attitudes along with dialogue are completely believable. I love Nanna Purvis’ hilarious misuse of words and strongly held opinions. One unanswered question has haunted Tanya ever since that summer. The narrative ends where it began, with Tanya at her parents’ house as the story comes to a completely unexpected and shattering conclusion. Liza Perrat’s descriptive, assured prose and story-telling skills make this a compelling and evocative read.

What psychological suspense novels have you read, that these remind you of?

Alison has been reading The Silent Kookaburra by Liza Perrat

This is a really well-written and absorbing story. Set in 1970s small-town Australia it centres on Tanya – an unhappy child, overweight, bullied at school and trying to cope with her mother who has been devastated by a series of miscarriages. Her father loves her, but he doesn’t cope either, seeking solace far too often in the local pub, and her grandmother, Nanna Purvis, is a hard woman, although her kindness shines through as the novel progresses.

When her mum finally gives birth to a daughter, Tanya thinks things will be fine, but problems with baby Shelley’s health, cracks in her parents’ marriage and the arrival on the scene of creepy Uncle Blackie mean that Tanya has much more to deal with than she can cope with.

And things only get worse.

But this isn’t a miserable story. Yes, some parts are uncomfortable to read. I wanted to whisk poor Tanya away and give her a cuddle and a decent meal. But there are glimpses of hope – Nanna Purvis, who underneath her hard exterior is full of love, and Tanya’s best friend Angela and her kind and loving (if possibly criminal!) family.

The author obviously knows her setting well and there’s a real sense of time and place with little details about food, TV and fashion giving the realistic touches that make this novel so authentic.

A well-executed book about family, relationships and the extraordinary things that can happen in ordinary lives.

All eleven-year-old Tanya Randall wants is a happy family. But Mum does nothing besides housework, Dad’s always down the pub and Nanna Purvis moans at everyone except her dog. Then Shelley arrives –– the miracle baby who fuses the Randall family in love for their little gumnut blossom. Tanya’s life gets even better when she meets an uncle she didn’t know she had. He tells her she’s beautiful and could be a model. Her family refuses to talk about him. But that’s okay, it’s their little secret. Then one blistering summer day tragedy strikes, and the surrounding mystery and suspicion tear apart this fragile family web.  Embracing the social changes of 1970s Australia, against a backdrop of native fauna and flora, The Silent Kookaburra is a haunting exploration of the blessings, curses and tyranny of memory.  Unsettling psychological suspense blending the intensity of Wally Lamb with the atmosphere of Peter James, this story will get under your skin.

Liza grew up in Wollongong, Australia, where she worked as a general nurse and midwife for fifteen years.
When she met her French husband on a Bangkok bus, she moved to France, where she has been living with her husband and three children for twenty years. She works part-time as a French-English medical translator, and as a novelist.
Several of her short stories have won awards, notably the Writers Bureau annual competition of 2004 and her stories have been published widely in anthologies and small press magazines. Her articles on French culture and tradition have been published in international magazines such as France Magazine and France Today.

The Silent Kookaburra, a dark psychological suspense novel set in 1970s Australia, was published in November, 2016.

Friends, Family and Other Strangers From Downunder is a collection of 14 humorous, horrific and entertaining short stories set in Australia, for readers everywhere.

Liza is a co-founder and member of Triskele Books, an independent writers’ collective with a commitment to quality and a strong sense of place, and also reviews books for Bookmuse.