Jump on board the Mystery Tour Bus and enjoy the ride.

A university research team claim their new sports drug will boost the performance of every athlete in the world. The Lambeth Group send scientist, Gavin Shawlens, to investigate the claim.

The product is stolen, top athletes disappear, and the research team are unaware that their product has a dangerous side effect. Gavin must stop the sports drug launch before more people die.

When Gavin disappears – Zoe Tampsin searches frantically to find him before he becomes the next victim.

As if Zoe hasn’t got enough on her plate. Past events in Gavin’s life catch up with him. A powerful US general decides that Gavin must die to prevent exposure of a 60-year old secret capable of world-changing and power-shifting events.

The chase is on…

I love to read stories where I have to think about the plot, how it is unfolding and why. The deeper and more complex the mystery – the more I enjoy trying to unravel the story. I like to write stories with mystery and suspense with some thrilling scenes.

The book set in Hampshire, in the fictional University of South England.

Gavin Shawlens is an academic, seconded when required, to work covertly for Home Office Lambeth Group. The Group police crime/fraud in UK research and technology. Zoe Tampsin is a Captain in Special Forces. Zoe is Gavin’s minder. Gavin is drawn into a new investigation while mourning the loss of his teenage love. Uneasy partners, Zoe’s patience is tested, but they need each other to survive the fall out.

Website: the first 9 chapters of each book can be downloaded http://gordonbickerstaff.blogspot.co.uk/

Today’s review comes from Noelle, she blogs at http://saylingaway.wordpress.com 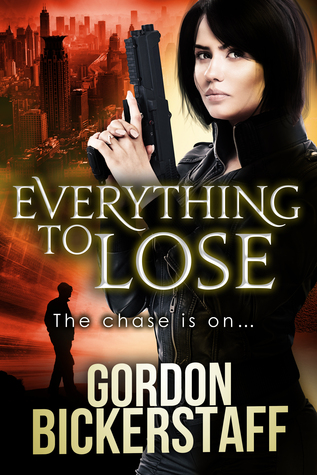 Book Review: Everything to Lose by Gordon Bickerstaff

This is the second in the Gavin Shawlins Thriller series. I did not read the first, but this book is written well enough to stand quite on its own…although the reader is left with a cliffhanger.

The novel begins in Berlin in 1936, when Hitler, disappointed by the performance of some of the German athletes, is told by his advisers, who seek a plausible excuse, that the Americans have fortifying energy drinks. This drink gives them the energy to win. Despite the fact this is an utter lie, Hitler directs his scientists to develop such a drink.

Aiden McSwann, father of a child with a special problem, borrows money from the wrong people to pay for her medical care and ends up as a slave in a drug factory when he can’t repay the loan.

The member of a judo team, locked in a room by his teammates after his grandstanding costs them a tournament win, disappears in thin air.

Aiden McSwann’s wife is beaten and threatened by thugs, looking for something they think was left with her by the missing judo player.

Sir James Barscadden, once a respected billionaire, becomes involved in criminal activities, but manages to escape from England despite the best efforts of an MI5 team to capture him.

And this is the problem I had with this book: four full chapters of seemingly unrelated threads before the crux of the story begins in chapter 5. I was just a tad confused, and ended up rereading some of these chapters to make sure I hadn’t missed anything.

In chapter five, we learn that a research team has produced a new product it claims will boost the performance of every athlete in the world. The Lambeth Group, an investigative group within the British government, puts together a team using some of the MI5 agents and a scientist, Gavin Shawlins, to investigate the claim, which they believe is bogus. A top athlete using the product disappears, the product is stolen, and the team discovers the slave-run drug factory is involved. Then Shawlins himself disappears. Complicating the story is the fact a powerful US general has decided that Gavin must die to prevent exposure of a 60-year-old secret capable of world-changing and power-shifting events.

Despite the introduction of more governmental units than I could keep track of, the plethora of threads weaving in and out, and seemingly endless twists and turns, I was interested enough to finish the book. However, it was a challenge. There was an overwhelming amount of exposition and backstory to wade through all along the way, which tempted me to skip pages – but then I would miss yet another thread.

The basis of the plot is contemporary, the introduction of a historical context adds interest, and the author is a good writer, which saved the book for me. I recommend it to any spy/thriller/ mystery/government conspiracy lover with a strong mental constitution.