Brittany has been reading, Garbage Collectors by Mike Grabois 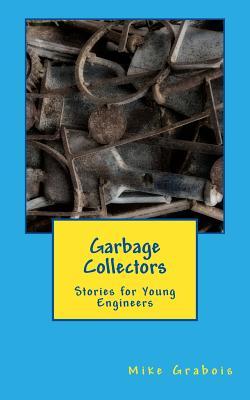 Garbage Collectors: Stories for Young Engineers is a middle grades book about kids who use their own ingenuity to solve problems and improve the world around them.

When I first saw the description for Garbage Collectors, I wanted to get a copy as soon as possible. Garbage Collectors is a collection of short stories about heroes and heroines who do not have anything extraordinary or magical happen to them, but they positively change the world around them by using their intellect.  As the author points out, the process of solving problems is not just a mental exercise.  It involves all of them. While solving problems, the characters experience “anger, happiness, sadness, ecstasy, amazement and more.”

The collection features six short stories that feature Jack and his cousins Alex and Ria.  The trio face realistic problems that they attempt to solve such as pollution, the impact of natural disasters, and even a creating a new science attraction for an amusement park. Throughout all the stories, the characters are positive role models who seek feedback on their ideas and willingly incorporate and build off of the input of their peers and mentors. Some of the characters struggle with the courage to voice their ideas for solutions. And the intelligent Jack sometimes thinks his friends are just using him for their own benefit. But ultimately teamwork wins out. They rely on one another for emotional and intellectual support to successfully impact their world.

I heartily recommend Garbage Collectors to any middle grades student for two reasons.  First, when I was a student, I didn’t have the faintest idea what an engineer did. Garbage Collectors provides clear examples of how science class can translate into action in the real word outside the classroom.  Second, even if the reader has little interest in engineering, the team dynamics in each story are surprisingly realistic and reflect issues that all types of professional and academic teams can relate to.

Jack Drozd thinks he’s an ordinary boy-but how come he and his friends get involved in crazy adventures? Could it be because they love mystery and suspense, the excitement of chasing ideas and are filled with a desire to figure things out? But their adventures don’t require travel to remote or dangerous places, or transformation into creatures with magical powers. All they have to do is… think like engineers. In each of these stories the kids encounter a problem, such as garbage in the middle of a pristine pond, a snowball fight or a flood that might damage their school. They don’t need to be special geniuses to solve these difficulties, just willing to think. This process, however, isn’t purely mental, it also engages all their emotions, anger, happiness, sadness, ecstasy, amazement and more. And even better, these stories also invite the reader to think about the method, find flaws in the presented solution or find a better answer.