The Night Porter by Mark Barry

The Night Porter is a modern contemporary piece of art. November, England and the prestigious Arkwright Book Awards are just around the corner. A golden award for Best Writer is the ultimate prize along with it’s cash reward, and receiving an “Alf” is the book equivalent of the Grammys.

Organisers of the ceremony have taken over all the local hotels and this story is based around 4 authors they have booked into The Saladin Inn. During their stay nothing is too much, their every whim must be catered for and everything is paid for by the Arkwright group.

Amy is a best selling romance novelist, Frank a thriller writer, Jo a YA/NA fiction writer and Julian the outsider, a self-published e-book writer of contemporary fiction. Each with their own characteristics, it’s Julian who causes trouble. He is argumentative and rants about the other authors. Amy says he has a chip on his shoulder because he hasn’t been through and survived the ritual of selection that traditionally “published” authors have gone through.

The story is told by The Night Porter of the Saladin, the one who listens late at night to those wanting to talk, he tends to their late night needs and is professional to the end. He’s there when a shocking event occurs and he’s there at the final awards as a guest.

There are plenty of twists and turns and the musings of the Night Porter in detailed foot notes to the text make an extra layer to the book. (footnotes are only in the paperback version)

For my own personal reading experience the footnotes were a distraction and slowed down my read, but I can see them being entertaining, you almost need to read the book twice, once without the footnotes and then with, to get the most from the book. They are a clever style which puts Mark Barry “out there” as an artistic writer. 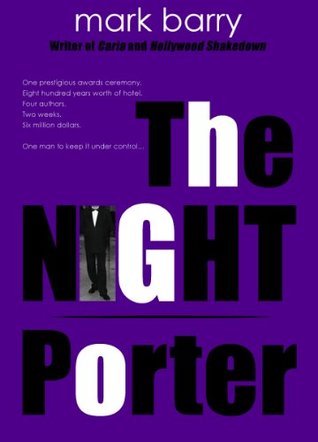