Today’s team review is from Olga she blogs at http://www.authortranslatorolga.com

Olga has been reading Roots Entwine by Victoria Bastedo 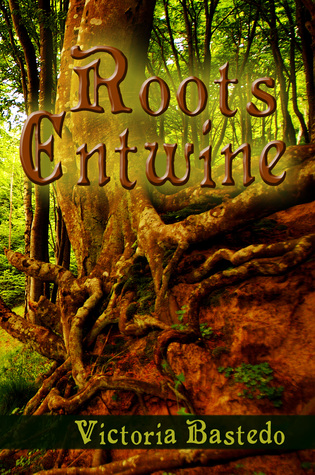 I am not the biggest reader of YA fiction, although on occasion I read it and enjoy it. I’m not a big reader of fantasy either but something in the description of this book intrigued me.

The story of Joaquin and his adventures, although told in the third person, is narrated from his point of view. At fifteen, he is not a typical teenager (if there’s such a thing), as he’s different to the rest of his family (he’s blond and has blue eyes, and as he’s also a second child, it turns him into the victim of family legend, and he becomes a secret, somebody who must hide in the forest and whom nobody outside of the family knows exist). The story is set in a world that’s different to ours (it appears less technologically advanced, as people walk or ride horses only, and don’t seem to have any ways of communicating other than sending messengers to each other), with different kingdoms that live by different laws and rules, and have little relationship with each other. To Joaquin’s forest arrives a stranger from another kingdom, looking for a man to join his expedition. Although Joaquin is not a man yet, he has something the stranger wants. Because Joaquin is not different by his looks only, but he also has a ‘gift’ or ‘curse’ (depending on how one looks at it). He’s a Phoshat. He has the ability to open up his senses and perceive smells, hear things, notice vibrations… very far away. He’s not the only one with such power, but he’s selected to go on a mission to stop a dangerous villain.

The book is a quest (if you’re familiar with Joseph Campbell’s The Hero with a Thousand Faces, it fits perfectly with his description of the monomyth), a bildungsroman (where Joaquim, who’s lived having little contact with others, learns how to become a member of a team, and how to be a man), and has elements of the fairy tale (the special powers that are not exclusive to Joaquim, the different kingdoms, the magical trees, the legends…). A fascinating aspect of the story is the duality of Phoshat. It is a gift, as it allows Joaquin to experience things more intensely, and can be put to use helping others, but it comes at a price. Every time Joaquin uses it, he feels ill, to the point where he’s unable to do anything and has to rest and sleep, for hours or even days at a time. There’s also the risk that if he overuses it, he might lose his mind or die. Throughout the book we also discover that Phoshat is neither good nor bad in itself; it depends on how the person uses it.

Joaquim, despite being a Phoshat, is a young boy, fairly naïve, curious and impulsive, as it pertains his age (well, at least in the world where the story takes place. It’s very difficult to imagine a boy of fifteen with so little exposure to the world nowadays), but he’s also intelligent and learns quickly. He makes mistakes, he gets fed-up with the members of his team, whom he doesn’t understand at first, and who mistrust him because of his age and his abilities.

The story is told at a leisurely pace, and although they get involved in a number of adventures, those are not gripping and edge-of-your-seat extraordinary events (mostly to do with Joaquin trying to learn to control his gift and earning the trust of his companions) but a part of the journey. Towards the end, things pick up as Joaquin and his friends are in real danger and he gets to prove himself (I don’t want to share any spoilers but there’s a very good twist).

There are interesting names to go with the story (although they are all different enough to not result confusing), and enough descriptions to give a flavour of the places without going over the top. For me, the most interesting passages were the ones describing how Phoshat works, and also the special connection between Joaquin and the trees and forest.

The novel can be read as a straight fantasy adventure, but it also works as a fable to illustrate the ills of the lack of tolerance and the failure to accept those who aren’t like “us”, and also as a tale to remind us that together we can achieve much more than as individuals, no matter how special we think we are.

I was slightly disappointed by the fact that there weren’t many female characters and those that appeared played very traditional roles (mothers, daughters, wives…) There is a young girl, Malaya, who takes an interest in Joaquin (it’s mutual), and she speaks her own mind and is quite rebellious, but she does not step outside the constraints of her ‘feminine’ role. I know perhaps it’s become a rule that girls are the protagonists of many stories, but I missed them having more than a bit part.

An interesting story, for those who enjoy taking their time getting to know the characters, reminiscent of the fairy tales of yesteryears.

Hidden in the trees is a boy with a mysterious past and powerful ability—will the team that found him have to watch him die?

15-year-old Joaquin can hear a man’s heart beating a half a mile away. He can see in the dark when others are stumbling. One whiff and he can tell what was served for yesterday’s dinner. But then he needs near-coma sleep to heal his brain from the searing pain. He’s a Phoshat, and his ability comes with a price.

Rumors spread about the mysterious Phoshat living in the forest around his family’s estate. Then Kallum comes, the tall stranger who leads a mission team for the king. He’s determined to add a Phoshat to the list of talents that his team boasts. He takes on the responsibility of a teenaged, untested Phoshat, and they set out, but soon it’s evident that Joaquin’s gift is so powerful that it almost swings out of control. As their journey goes on and unconsciousness overwhelms Joaquin over and again, Kallum begins to question whether Joaquin is ready for the dangerous mission that’s growing more intense every day.

Joaquin wonders too. Why was he born different than everyone else?

Roots Entwine is a young adult fantasy adventure. A tree standing alone shades no one, but entwining his life with his team moves Joaquin towards the inevitable choice he must make for them. It’s up to him to decide what the sum of his life will be, and if his inborn ability will be a curse to him or the gift that saves his friends.