The Great Convergence by Joseph Lallo

This is the second book in the series and I enjoyed it as much or perhaps even more than the first. A Fantasy world with magic and some really creative creatures. I love the little dragon. The story continues and the characters return to a war torn world in an attempt to join others who can help stop the war. New battles, new conflicts and a search for the Chosen test all that Myranda has learnt. The book ends in a tantalising finish which can only lead to the next book.
http://www.amazon.co.uk/Great-Convergence-Book-Deacon-ebook/dp/B004I437ZO/ref=sr_1_2?s=books&ie=UTF8&qid=1371112067&sr=1-2&keywords=the+great+convergence

My letter today for the challenge is “Q”. I can’t believe we’ve reached this far so quickly! Quest for the Oracle is part of the Chronicles of Myriad by James Nicholas Adams As part of the challenge we are asking all readers of the posts to leave a comment, thanks!

About Quest for the Oracle;
Eight years after watching his best friend Kristine disappear, Jason embarks on a journey to find her. While exploring the Keash caves he frequented as a child, he falls and hits his head, rendered unconscious. He awakens to find himself chained up in a cage on a world unlike anything he has ever known and only an arm’s length away from Kristine. The reunion is short lived as a sudden dragon attack on their captors causes them to once again become separated. Shortly after, he meets the Prophet Tanas who takes him to meet Jerech, an Elvish king and Jason’s birth father. Here, he learns Kristine is in the hands of a nameless tyrant and embarks on a quest to free her. Along the way he discovers there is far more to the reason he is here than he thought, and he has a destiny beyond anything he ever imagined.

One reader’s thought on the book were;

A well written book, cannot believe it’s a first from this new author and am delighted to be the first to review it. It is an exciting, fast paced adventure book that I had difficulty putting down. A baby named Jason is left on a doorstep in Ireland, the disappearance of a young girl named Kristine in the dark Keash caves in Oregon, but soon you are in another dimension where Angels, Dragons, a Dark Lord, new creatures, the destruction of the city Sherauk, magic, wars and legends emerge. A great book, it embraces danger, determination, love and courage. A must read for fantasy adventure fans!

Here are today’s 5 random links to other AtoZ Challengers; 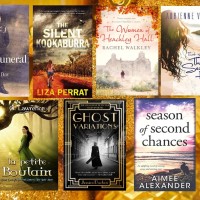