I started reading “A Year of Doing Good” by Judith O’Reilly, and because I’m known in some circles “As that Mad Blogger!” I thought I’d immediately start my own diary of good deeds. I’m under no illusions that it will be easy or that I’ll make it to the end, but here goes the only rule is that I can’t count helping my husband, daughter or son because I do things for them everyday as part of my wife and mother plan. (Unless I’m giving away a kidney or something!) Here is a link to my review of the book http://wp.me/p2Eu3u-1hL

16th April – Spoke kind words to a complete stranger in  M&S whilst we both walked round and round because of a shop refit where they’d moved everything. She probably thought I was completely bonkers! Promoted 5 other bloggers on my A to Z Challenge and visited 4 more leaving comments. Said a prayer for those affected by the Boston Marathon bombs.

17th April – Gave my 71-year-old mother 2 hours of my time for a chat and helped dig her garden. Visited 8 blogs and left comments.

18th April – Took a card and present around to my friend’s son and added a box of homemade cakes. Got involved with some work at home and left the visit a bit late. Dodged out in a thunderstorm and arrived with a slightly damp present, good job I’d put a lid over the cakes. Visited 5 bloggers today and left comments.

19th April – Tried all day to e-mail a friend and kept forgetting. Politely allowed other shoppers to go before me in a heaving supermarket, whilst my brain wanted to shout out “Get out of my way”.

20th April – Tea at my mother-in-laws, ( Always an endurance as I object to sharing my cakes with little furry rodents who’ve already tasted the goods) I took along cakes (guaranteed rodent free), emptied the dishwasher, cleared away the tea-things and refilled the dishwasher. I don’t have a dishwasher so the controls always baffle me, turned it on to the wrong setting, tried to change it and messed up the program, left mother-in-law to fix the mess. Went outside to do penance in her garden digging the vegetable plot for an hour. (Got a sore back and little thanks) Finally e-mailed that friend and visited another 8 bloggers today.

21st April – Gave directions to two lost strangers.(Hope it was the right place!) Dropped off a sports shirt to a friend for her son. Left a comment on Judith’s blog re my 5* review of her book which I posted on Goodreads and signed up for her blog.

22nd April – Have started my own collection in a jam jar (You’ll need to read her book to understand this) and added a 2 p coin everyday (don’t laugh! I’m starting small in case it bankrupts me and I can always give bigger amounts later) Today I helped out as a volunteer at a school for an hour and a half, then collected and delivered a large bag of potatoes for a friend. Not much else today as I also had to fit in 4 hours of work. Left comments on more than 5 blogs, just can’t remember them all.

23rd April – A work day today, yet opportunities arose where I could do good deeds. Went out of my way to deliver a phone to my boss who had left it in the office (because I was fed up answering it for him!) Pulled aside for 2 cars to pass on a single track part of the road (thanked by the first driver and ignored by the second, but judging by the way the little old lady was hunched over the steering wheel hanging on for grim life, perhaps not waving to me was the safer option?) Went out of my way to take my post office needs to a small village shop, hoping my money will prevent them closing down.

24th April – Gave a donation to a Youth Cancer organisation which were collecting outside of the supermarket. Visited more bloggers and left comments.

25th April – Added to my charity jar the 10p I found whilst out on my travels. E-mailed a friend who is ill to cheer her up.

26th April – Donated to MacMillan collection whilst at the shops, took around dinner and buns to a great friend who helps me with some of my social networking.

27th April – Caught up with lots of commenting on other people’s blogs, still checking in with bloggers from my AtoZ Challenge.

28th April – Went to work on a Sunday! Just to drop off some work so that a colleague had a clear desk and a head start on Monday morning. Just a bit on fellow blogger interaction today.

29th April – An hour and a half at the local school as a volunteer helper, then back to the bloggers. Wrote a letter to a spritely elderly relative, who has a busier social life than me, to check in with her or more correctly to check on her whereabouts!

30th April – I’ve made it to the end of the month doing a good deed a day, that means readers that I’ve passed my own test and will now have to commit to carrying on. Busy with work and domestic chores today, spent too much time texting a friend when e-mailing would have been more sensible and easier to read because I make up my own texting abbreviations which baffle even me! Arrived to see the second half of my sons cricket match in freezing conditions and spent an hour chatting to a solitary Grandmother of the opposition, with one eye on the game, stopped her from being alone, not thinking she may have chosen that rather than have a complete stranger ramble on at her. 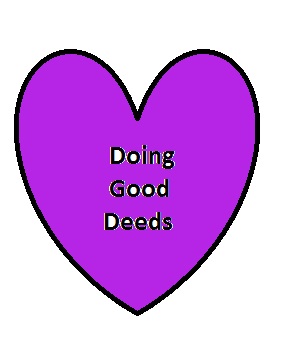 Come back each Sunday for a weekly update on my latest challenge.