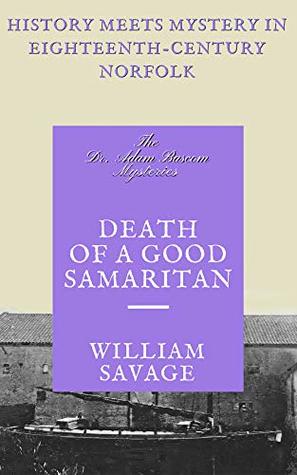 William Savage is the author of two Georgian mystery series, one featuring Ashmole Fox, a colorful book seller, and the other Adam Bascom, a physician. I will confess that despite my medical background, I have been drawn more to Ashmole Fox, but this latest in the Adam Bascom series has changed my mind.

This book is located in Norfolk market town of Aylsham in 1794 and as well as Millgate and the Bure Navigation – the upper reaches of the river Bure, which extended from from Horstead to Aylsham and which included locks. The author has included a map, which greatly helped in my understanding of the area. Agricultural produce and bricks were among the main cargoes on the new navigation, carried by wherries, which to readers on this side of the pond, is a long, light, shallow-draft rowboat used for transporting goods and passengers.

Now to the story: Dr. Adam Bascom wants nothing more than to be fully engaged in his medical practice, but he is wildly distracted –first by his love for Lady Alice Fouchard and then by the murder of a kindly surgeon on the outskirts of Aylsham. The death is ruled an accidental death by the local coroner, who has no medical background nor any evidence to support his conclusion. Bascom, who has an established record of solving cases of mysterious deaths, is drawn to discover what happened to his fellow physician but finds no more than tidbits of information and is frustrated by the reluctance of the locals to talk to some of a high social status.

As a reader, I was getting very frustrated myself until the good doctor meets the surgeon’s former housekeeper, Rose Thoday. Ms.Thoday is not your usual housekeeper, being something of a wise woman (skilled in the use of herbs and plants in healing) and having learned a great deal of medicine from her former employer. She wants to be an equal partner in the investigation, posing a conundrum to Bascom – he needs her information and help but how can he collaborate on equal terms with a mere woman? What will upper-class society — and Lady Alice — think of him if he does?

What Rose and Bascom eventually find, with many stops and starts, is a conspiracy of clever, desperate and ruthless men, deeply involved in smuggling and murder. All face the gallows if they are brought to justice, and one will not hesitate to kill again in order to avoid discovery.

As usual, the author does an incredible job bringing the reader into the Georgian Age. Competition from railroads and a disastrous flood that caused major damage to the locks on the river early in the 20th century led to the end of the Bure Navigation, which has not been restored. Thus the author has done a yeoman’s job helping the reader see this historical navigation as it was in its heyday.

The detail is outstanding and the characters, many introduced in previous books, are compelling. Lady Alice is intelligent and gracious and knows well and accepts Bascoms foibles. His closest friend, the apothecary Peter Lassimer, does not figure as largely, but offers humor to counter the doctor’s gloominess. Rose Thoday is a very forward woman, whose fearlessness I enjoyed.

The plot was tortuous and I was constantly rearranging my suspects. I’ve learned from the previous books in both series that the pace of life in the 1700s was slow compared to today, and thus the mysteries in these books develop at the same deliberate pace. It makes the reading of the book leisurely, which contributes to the absorption of the details.

I liked this book the best of the Adam Bascom series and I highly recommend it to mystery readers and especially lovers of historical mysteries.

A new investigation is the last thing that Dr Adam Bascom wants. He’d much prefer to devote himself to sorting out his future. But when a kindly surgeon living on the edge of Aylsham is brutally murdered, and the local coroner does all he can to bring in a verdict of accidental death, Adam knows he has no choice.
At first, a grave shortage of direct evidence and the reluctance of the locals to talk freely to someone so far above them socially look set to prevent any progress. Still, Adam persists, drawing on whatever help he can muster from friends and contacts. Even so, progress is slow until more help arrives in the unexpected form of the surgeon’s former housekeeper, Rose Thoday. Can our young doctor accept collaborating on equal terms with a mere woman? What will upper-class society — and Lady Alice — think of him if he does?
Adam must grapple with much more than the dispassionate mental challenges he’s been used to. This time, he’s up against against a conspiracy of clever, desperate and ruthless men. All face the gallows if they are brought to justice. One at least will not hesitate to kill again to save himself.
This is a contest which may very well cost Adam and Rose their lives.