Today’s second team review is from Judith, she blogs at http://judithbarrowblog.com/

Judith has been reading Deadly Alliance by Kathleen Rowland 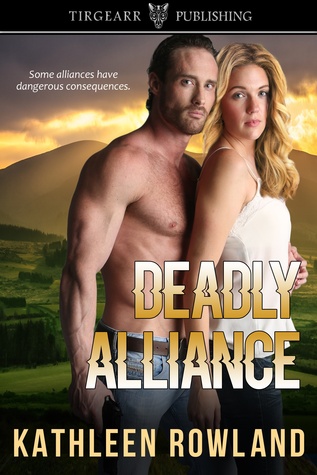 If you read the blurb before beginning this book , I think it tells too much; it’s a while before we learn Less is still alive. I would have liked that to remain a secret until the story evolved more. There are two excellent plots running parallel in the book that Kathleen Rowland juggles expertly; one of fraud and one of terrorism and crime. They are good, though complicated plot-lines that keeps the reader on their toes. Added to that are the various sub-plots; of Les and the familial complicated lives of Finn’s step family.

When I first started to read Deadly Alliance I instantly liked both the protagonists, Amy Kintyre and Finn Donahue.  Good rounded characters, portrayed as ambitious and strong.  I looked forward to following their story. and we learn a lot of their back story without any information dumping.

And the many brilliant secondary characters are also given depth and personalities.

The story is told from an omniscient narrator’s point of view who dips into each character so that we can follow the train of thought from both Amy and Finn. My problem here was that sometimes the lines blurred and I had to go back and re-read to check who I was following. And, once or twice, the author gave the point of view from a minor character. Now this last point is a personal one; I like the points of view separate; to be told the story in different time lines or chapters. If, as a reader, I’m to look into a character’s head, I want them to have more input, even to have equal input. But, as I’ve said, this is purely a personal preference.

My other problems were phrases and the dialogue. And again this could be the difference between the UK and USA perspectives. Or I didn’t quite ‘get’ the genre. I don’t know. I just found some of the phrases and descriptions from the omniscient narrator of the characters’ body language and actions were over-explained and laboured. I just couldn’t picture them, or they seemed unrealistic. This was in some of the ordinary scenes, the fight scenes and the sex scenes.  With reference to the sex scenes I have read many and they never offend. It wasn’t that; I only mean that, from my point of view, there was too much emphasis on them and the sexual innuendos; they were too overtly erotic compared with the rest of the book. And they detracted from the two strong plot-lines. I would have preferred them to be more subtle. And the fight scenes, although described blow by blow, felt strangely detached in their commentary.

And I found both Amy and Finn’s dialogue, internal and spoken,sometimes clichéd and grating; they read oddly for me; quick fire comments such as  “curse a blue streak” and ” third- wheel nervousness” interspersed with each of the characters’ dialogue, took me right out of the story; suspended disbelief in other words. I felt this to be a shame. But … as I said, this could perhaps be the difference between a reader in the UK and one in the USA.

Very much on the plus side are the brilliant descriptions of the various settings that the author give us. The scenes in Burlie’s Jazz Club, the various outdoors scenarios, the houses, the cabin, the weather, the pontoon boat scenes; all are full of evocative imagery; all give a true sense of place.

I was glad that, towards the ending, there was resolution for Amy’s original plans; that the author returned to the first scenes of the book. It brought about a sense of resolution. In fact there was a couple of lovely scenes towards the end that resolved quite a lot for nearly all of the characters. I enjoyed those.

And then there was the twist at the end. It felt a little rushed but it was a good denouement.

Picked up this litter in less than 30 mins. #keepingbritaintidy #pickinguplitter #litterpicking #plasticfreejuly #hampshiregirl
'Small Forgotten Moments is the story of Jo Mckye, an emerging artist celebrating her debut exhibition. But her fictional subject, Zenna, has become an obsession. We see Zenna infiltrating every part of Jo's life and her unconscious as Jo increasingly struggles with telling the real from the fictional. She is driven to return to her childhood home and learn about her past in an effort to understand Zenna's origins, and try to rid herself from this malevolent influence.'
Yellow orange flowers 💐 not quite sure of their name. Anyone have a suggestion? #yellowflowers #orangeflowers #gardenflowers #urbangarden #countrygarden #hampshiregarden #lovegardens
Drag, Songs, Friends, Laughs, Lies, Danger & Redemption - a story set in a gay bar in Magawatta, Indiana.
'A biography of the life and works of the man who created Middle Earth.'
New Tasty Good Reads! Books and Cheese from Fromage and Fiction in conjunction with Cheese Cuisine. @cheesecuisine @fromageandfiction
'A close-knit group of friends set off on a hike in the remote, mountainous Tsitsikamma region of South Africa. Three couples, one father and his daughter. From the beginning there are problems; one person falls ill, and another takes no notice of the rangers' weather warnings, leaving them stranded in various locations.'
When you are on day 12 of isolation because you have two family cases overlapping, surprise flowers from a friend mean the world! #surprisedelivery #friendship #friendsmeaneverything
A little treat for myself. Bought from https://moteefe.com/store/garden-lovers