E.L. has been reading Dead On Leave by Chris Nickson 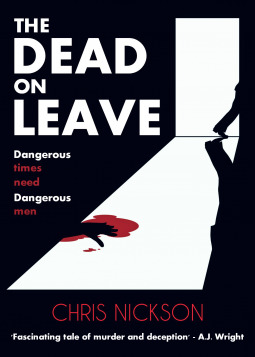 The Dead on Leave by Chris Nickson is a gripping crime novel set in 1930s Leeds. From the opening page I was engrossed in both the story and its historical backdrop.

The novel’s protagonist is the likeable Detective Sergeant Urban Raven who is tough and cynical but has an underlying insecurity that becomes most apparent in his relationship with his wife. Urban has facial scars from injuries sustained in WW1 and this defines how he sees himself and how others see him and treat him. He refers to his marriage as “beauty and the beast” and there is the sense that he feels he doesn’t deserve to be happy.

The story begins as supporters of Oswald Mosley prepare to stage a rally in Leeds which provokes a violent clash with Communist protesters. This proves to be a challenge for the police and is made worse when someone is murdered during the melee. Urban and his colleagues, unused to such serious crimes, struggle to solve the case which becomes even more problematic when there are two more murders which are somehow linked to the British Union of Fascists.

The crime element is engaging, especially as Urban proves to be a good, methodical investigator willing to do whatever it takes to solve the case. However, the novel has so much more than this to offer. Nickson’s knowledge of Leeds is evident in the way he expertly describes the drab landscape of a city still reeling from the Depression. Nickson uses the motif of vividly coloured advertisements posted around the city to highlight the bleak reality of a community where the majority of people are unemployed.

Nickson’s historical knowledge also brings something to the novel as men such as Urban are shaped by their wartime experiences. Almost every encounter he has with men of a similar age involve references to the war. At the same time the spectre of WW2 is looming in the background as Hitler is consolidating his power and his influence is spreading as a result of the widespread poverty and desperation. The media meanwhile are focusing their attention on the possible abdication of King Edward Vlll and his affair with Wallis Simpson.

Despite the fact that the novel is set in the 1930s it feels very relevant to modern Britain and I could relate to many of the issues it raises. The popularity of the British Union of Fascists as they play on the fears of people who are suffering the effects of austerity can clearly be likened to the emergence of groups like Britain First. The idea of ‘fake news’ is also not new as Nickson refers to it as “Bread and Circuses” where the media try and set the political agenda by focusing on stories designed to distract people from what’s really going on.

I really enjoyed Nickson’s exploration of Urban’s marriage to Marjorie who was his nurse when he returned from the war. Even though they have done better than most financially, escaping from the slums to new housing, their marriage is not plain sailing. Marjorie has suffered numerous miscarriages and the lack of children has created a void between them. Marjorie feels like she is disappearing and Urban avoids communication by focusing on work. The difficulties they face are believable and I’m sure lots of readers will relate to them.

All in all I enjoyed The Dead on Leave very much. It is well written with a lively plot that kept my interest throughout. If you enjoy a crime which is steeped in history then I suggest you give this one a try.

During a British Union of Fascists rally, a body is found.
War veteran Detective Sergeant Urban Raven is tasked with finding the killer.
But with virtually no clues, no witnesses and no obvious motive, he has few leads to start the investigation.
Leeds has become a shadow of its former self. Once a bright, vibrant and progressive metropolis, it has all but ground to a halt since the Crash of ’29, the Depression and the ensuing descent into unemployment and poverty.
And there are political stirrings as the BUF vie with the Communist Party for public support.
Was the murder an act of vengeance?
Was the victim killed for his political beliefs?
Or was the killing part of a more sinister plan, a grisly smear campaign? And if so, which side, if either, is responsible?
Raven and his colleagues find themselves constantly hindered by red tape, politics and the press. But sometimes, if you want a result, you just have to do it your way…
This puzzler of a crime story comprises convincing characters, a clever plot and a window into the dark days of 1930s northern England, where so many had lost hope…
…the dead. On leave.