Barb has been reading Day For Night by Stacey E Bryan 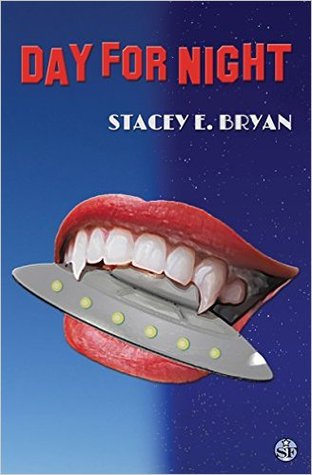 My Review: 4 stars out of 5 for Day for Night by Stacey E. Bryan

“She was mostly immensely relieved to think that virtually everything that anybody had ever told her was wrong.” —Hitchhiker’s Guide to the Galaxy Book 3, Douglas Adams

What is it about the manic pixie dream girl? Think Audrey Hepburn in Breakfast at Tiffany’s, Diane Keaton in Annie Hall, Zooey Deschanel in… almost anything Zooey Deschanel has ever been in. They are wild, free-spirited women whose main role seems to be to inspire their strong, silent (but secretly vulnerable) leading men to loosen up and embrace life. Unfortunately for Day for Night’s heroine Rae—actually Raine, but she can’t get anybody to call her that—there are two problems with being an MPDG.

First, she has to actually come up with said strong/secretly-vulnerable man in order to define herself. But every time she starts to get close, the universe steps in to end that possibility. Her first love and surfing buddy? Ended with the shark attack (that also took some of her fingers). Her fiance? Went home from proposing and disappeared. Her new crush, the sexy Italian massage therapist? Trained from birth to assassinate those like her. Her home?  She doesn’t just live in Los Angeles (“What’s the difference between L.A. and yogurt? Yogurt has culture.”), she’s a (recently fired) actress on a “reality” TV show where none of the characters are remotely “real”.

And the second problem? She sees aliens. They’re everywhere, usually kidnapping the people around her. Nobody else seems to see them, let alone be able to stop them. And—okay, so maybe I lied, and this is the third problem—the only one who agrees with her is the vampire. And his solution seems so… final.

Rae pinballs from disaster to disaster, desperate to protect those she loves, preferably without further damage to her personal version of Cinderella’s coach: her beloved, no-power-anything pumpkin-colored 280Z. (It is LA after all, where your car gets high ranking among your beloveds.)

Slowly, Rae begins to realize that something else is going on. Yes, aliens—properly SciFi horrors with iconic flying saucers and the whole nine yards—were abducting people right and left. And sure, magic was seriously messing with her life, probably from the time she’d drowned as a baby and been dead for more than fifteen minutes. But the real problem, as creepy cult leader Bob tells her, is that she’s letting her past control her present and thus own her future. “Bob, for all his faults, was right. We were never in the Now. Because the past or the future always had us by the balls.”

The shark, the monster circling below our dangling arms and legs, had seized so much more than my hand. It had seized my mind, my will, my life.

This sounds like seriously heavy stuff. But although it’s dark, it’s also laugh-out-loud, spew-your-coffee, flat out hilarious. Rae’s head is a seductively hysterical nonstop funny commentary on life, relationships, and love. With aliens and vampires, of course.

And the best part? We have a front row seat as our MPDG makes her peace within LaLa land, finds her inner strength, saves the world, and grows up.  Like the best things that LA gives us, Day for Night unapologetically accepts magic, aliens, vampires, and reality TV as the basis for a slightly-developmentally-delayed coming of age story. I loved every minute, even as Day for Night merrily drives over plotholes that should by rights sink even classic Z cars. There are plenty of unexplained bits that scream “SEQUEL” louder than Darth Vader’s escape pod spinning off into the next movie. There’s the obligatory unresolved love triangle, relationship secrets, and what really happened during those fifteen minutes that baby-Rae died.

But I recommend Day for Night without reservations to anyone who loves over-the-top funny, rollercoaster action, SciFi with a damaged, hilarious, irresistible heroine. As someone who grew up in California, I recognized so many of the people and places (and perhaps the odd alien) who race through its pages. As a reader, I’m grateful for the fun and can’t wait for the sequel.

What I wasn’t expecting was to turn the corner and find my thirty-something neighbor Annie, eyes open, silent, encased by a cone of light and suspended in midair just inside the doorway. Nope. Wasn’t expecting that at all.

When reality TV star Rae is dumped by her back-stabbing cast mates, she quickly realizes that revenge fantasies and unemployment are the least of her problems after she witnesses an alien abduction in broad daylight. And it doesn’t help that a vampire knocks on her door soon afterward. All Rae wants to do is buy a condo in Hermosa Beach. How can an unemployed wannabe actress save the world…or at the very least, Los Angeles?

Author Stacey E Bryan was raised in the San Fernando Valley but born in San Francisco, where she left part of her heart. She received a BA in English from UCLA, studying under late Irish journalist and novelist Brian Moore. Her work has appeared in several literary magazines in New York and L.A., including Ginosko and The Rag. She is currently working on the sequel to her novel Day for Night and hopefully one day soon the novelization of a sci-fi screenplay. She lives in “beautiful downtown Burbank,” as Johnny Carson used to say, with her husband who is also a writer.