Daring To Love The Duke’s Heir by Janice Preston

Daring To Love The Duke’s Heir is an historical romance. It can be read as a stand-alone or as part of the Beauchamp Heirs series.

Liberty Lovejoy is in London for the annual social season, where her family hope to secure husbands for Liberty and her sisters. Liberty’s twin brother Gideon has recently been given the title of Earl through an inheritance. Unfortunately it has gone to his head and Liberty fears he will squander all their money in the gaming halls while under the influence of Alexander Beauchamp. To this end, Liberty breaks etiquette and visits the home of the Duke of Beauchamp (Alexander’s father) to ask for help.

In an identity mix-up Liberty confides in Dominic Beauchamp, the Duke’s eldest son, who reluctantly agrees to look into the matter. However, he is currently preoccupied with his own search for a suitable wife; someone who will one day be a Duchess. Liberty worries that Dominic won’t take her concerns seriously.

The bold choice of name for Liberty Lovejoy sets the scene for this story, with Liberty growing in character throughout the narrative to fill out my expectations. I especially enjoyed her relationship with Dominic. Readers know there will be a happy-ever-after ending with this genre, but the journey to that end it is what this reading experience is all about. A lovely edition to the series.

…to be his Duchess!

Part of The Beauchamp Heirs: Dominic Beauchamp, Lord Avon, is a powerful duke’s heir and it’s his duty to marry well. His bride must have impeccable breeding, manners and grace. But can anyone meet his exacting standards? Certainly not the irrepressible Liberty Lovejoy, who’s been thrust into society after years of being a provincial nobody. She’s too bold, too bubbly…so why is she the only lady he’s thinking about? 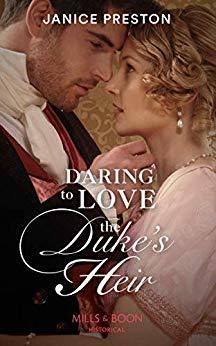