Judith has been reading The Circumstantial Enemy by John R Bell 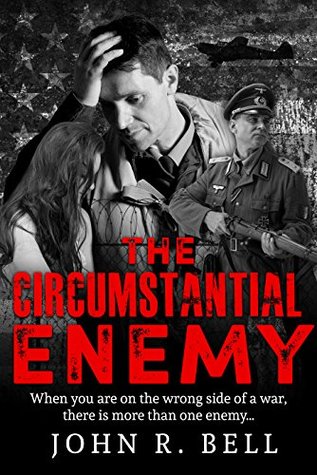 The Circumstantial Enemy drew me in from the first page; Bell has a writing style that has great depth, tells a story that has so many sub-plots, mixes facts with fiction, yet is easy to read

This book is based on real events that happened during World War II and it is obvious the author has also researched extensively. The plot reads authentically with many twists and unexpected events. Set between 1941-1952 , It’s a cross-genre story of history, politics, war  and romance: a story that exposes the devastation and horror of war, the reactions of human beings to the stress and trauma of enforced separation from family and friends, of enduring love against all the odds. The pace is swift and encompasses the difficult period when Yugoslavia was divided into Serbia and Croatia,  moving to Italy, the stockades in North African,  American prisoner of war camps and on to post war Europe.

Yet all is not doom and gloom; there are touches of humour here and there, showing the resilience of the human condition.

The characters  are well portrayed with authentic and individualistic dialogue, particularly that of the protagonist,  Tony Babic, shown in so many layers through both his actions and internal  dialogue as the story progresses. As the story moved forward I felt, as a reader, that I almost knew what his responses would be to everything he faced. This is a strong protagonist, embodied by self-respect, honour, courage; a man who faces life with stubborn perseverance even in his darkest moments. And the minor characters, being well drawn and believable, give excellent support within the plot.

The descriptions of each of the settings are extremely well written and give a great sense of place.

If I had any reservations about this debut novel it would be that sometimes, just sometimes, a point is belaboured, slowing the action down. But, as I say, it is a small irritation compared with the enjoyment I had reading The Circumstantial Enemy.

I would recommend this novel to anyone who enjoys historical fiction with wars as the background and a touch of romance and  I look forward to reading John R Bell’s next novel.

Downed by the Allies in the Adriatic Sea, Tony survives a harrowing convalescence in deplorable Italian hospitals and North African detention stockades. His next destination is Camp Graham in Illinois, one of four hundred prisoner of war camps on American soil.

But with the demise of the Third Reich, repatriation presents a new challenge. What kind of life awaits Tony under communist rule? Will he be persecuted as an enemy of the state for taking the side of Hitler? And then there is Katarina; in letters she confesses her love, but not her deceit… Does her heart still belong to him?

Based on a true story, John Richard Bell’s The Circumstantial Enemy is an energetic journey to freedom through minefields of hatred, betrayal, lust and revenge. Rich in incident with interludes of rollicking humour, it’s a story about the strength of the human spirit, and the power of friendship, love and forgiveness.

John Richard Bell was born in Chigwell, UK and now resides in Vancouver, Canada. Before becoming an author of business books and historical fiction, he was the CEO of a Fortune 500 company and a global strategy consultant. A prolific blogger, John’s musings on strategy, leadership and branding have appeared in various journals such as Fortune, Forbes and ceoafterlife.com.