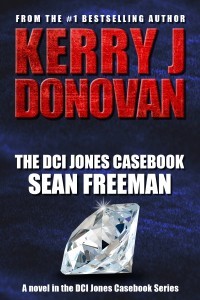 I read another of Kerry Donovan’s books, ‘On Lucky Shores’ for Rosie’s review blog, which I liked a lot, so chose to review this one as soon as it was submitted. Whereas ‘On Lucky Shores’ is an all-American mystery thriller set in Colorado, this is a traditional British detective type story. I think Donovan’s American mode has the slight edge, but this one also stands up well next to the best in its genre.

The first part of the novel consists of two storylines: DCI Jones and his merry throng in the present day, and locksmith turned jewel thief Sean Freeman’s journey into the dangerous criminal underworld of Digby Parrish. Eventually, the two threads collide….

This book’s plot is quite a masterpiece, so well thought out, with plenty of nice little twists that I didn’t see coming at all. I was most impressed by the research that had obviously taken place to make the details authentic, but this is woven artfully into the storyline and is never obtrusive. The characterisation is terrific, in particular Digby Parrish (wonderfully scary!) and Detective Charlie Pelham, the latter of whom is a stereotypical 1970s throwback type of crime fighter – very funny! I liked DCI Jones, who is a little eccentric in a mild sort of way, and Sean Freeman is one of those criminals who you find yourself rooting for – I always admire a writer who can make you root for the ‘baddie’! I must applaud the dialogue all the way through the book, too.

I’d definitely recommend this to anyone who likes a good, current, British crime thriller. Kerry Donovan is a most talented wordsmith and I hope to read more from him soon.

Savage Payback is a crime thriller and the third book in the Jack Calder ex-SAS series who now run ISP (International Security Partners) The book opens with a brutal jewellery heist on London’s New Bond Street, when a well planned hit stole gems from 12 stores. As 3 of those stores were clients of Jack’s business he makes it his top priority to get involved with catching the thieves.

There follows a globe-trotting story of revenge and counter revenge as Jack and his team follow the trails leading to past adversaries and major dealers in drugs and crime across the world. There is a large cast of characters thrown at the reader early in the book and although the pace of the book isn’t hampered by large amounts of back story it was hard to decide which characters were major players and which could fade into the background.

The opening scenes were great, but then my attention was lost with all the planning, decisions and meetings, I felt the large amounts of dialogue told the reader the story rather than showing us with interestingly paced passages of writing, so rather than be drawn into the book I watched from behind a window.

The action picked up around half way through when each side took it’s share of attack and counter attacks, but by then I had lost my initial engagement with the storyline. I needed more emotions, it is an action book and men don’t “Do emotions” but it would help add a depth to the book and lift this to a popular series it has the potential to be.

Set in Moscow this is a tale surrounding some of the down and outs of the city. Drugs, murder, bribery and corruption written in a staccato style that emphasises the conditions and lives of the people involved as Arkady Renko investigates his next case.

A passenger train hurting through the night. An unwed teenage mother headed to Moscow to seek a new life. A cruel-hearted soldier looking furtively, forcibly, for sex. An infant disappearing without a trace.

So begins Martin Cruz Smith’s masterful Three Stations, a suspenseful, intricately constructed novel featuring Investigator Arkady Renko. For the last three decades, beginning with the trailblazing Gorky Park, Renko (and Smith) have captivated readers with detective tales set in Russia. Renko is the ironic, brilliantly observant cop who finds solutions to heinous crimes when other lawmen refuse to even acknowledge that crimes have occurred. He uses his biting humour and intuitive leaps to fight not only wrongdoers but the corrupt state apparatus as well.

In Three Stations, Renko’s skills are put to their most severe test. Though he has been technically suspended from the prosecutor’s office for once again turning up unpleasant truths, he strives to solve a last case: the death of an elegant young woman whose body is found in a construction trailer on the perimeter of Moscow’s main rail hub. It looks like a simple drug overdose to everyone — except to Renko, whose examination of the crime scene turns up some inexplicable clues, most notably an invitation to Russia’s premier charity ball, the billionaires’ Nijinksy Fair. Thus a sordid death becomes interwoven with the lifestyles of Moscow’s rich and famous, many of whom are clinging to their cash in the face of Putin’s crackdown on the very oligarchs who placed him in power.

Renko uncovers a web of death, money, madness and a kidnapping that threatens the woman he is coming to love and the lives of children he is desperate to protect. In Three Stations, Smith produces a complex and haunting vision of an emergent Russia’s secret underclass of street urchins, greedy thugs and a bureaucracy still paralyzed by power and fear.

I am now the proud owner of these Swedish Style Halloween Gnomes. Just couldn’t resist them.
Time For The Final Case For Stride And Cully.
A few pictures from my recent trip to #thecotswolds
Murder In The Cotswolds
A #FinancialThriller Set In London. Noelle Reviews The Grifter by
I get quite excited to discover what fruit and veg will arrive in my rescued #oddbox every other week. This is the medium sized box. #oddisgood #fruitandvegetables #rescuedfruitsandveggies
Yesterday I took delivery of this framed picture that uses driftwood and sea glass. Created by @debbiesykesart I fell in love with it as soon as I saw it, so just had to make a purchase. Debbie is based in #cornwall and has a shop on Etsy where you can find lots more of her artwork.
A Story Which Shows Compassion For People Doing Their Best To Make Their Way In The World. Frank Reviews DREAMer by @theemilygallo, for Rosie's #Bookreview Team #RBRT
My baby poinsettia plants will soon be starting their strict 12/12 darkness and light routine.