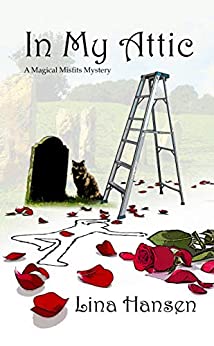 Welp, here we are, all pandemic-y together.

Many of us are practicing some form of isolation/shelter in place/ quarantine and there seem to be a lot of people touting that they are going to write/read/create out of paper mache an epic novel. Meanwhile I’m grateful to have far too much to do as well as three whole acres available when I’m trying to hide from my children but even with those blessings I am not in the mood for epic anything right now. Right now I’m more in the mood for something fun, easy, engaging, humorous and which involves not a single bit of hand washing. If you are feeling the same, I have got you covered – at least in the book department.

Would I recommend it?

Why yes, yes I would, but it is in fact book four of the Madam Tulip series and while it would stand alone just fine, I think it would be much more enjoyable if you started from the beginning.
The good news is that gives you four of just the right kind of books to read mid-pandemic before you think about doing something foolish like ripping the carpet off your stairs (P.S. Please someone stop me if I try to rip my old, dirty, ugly carpet off the stairs no matter what reasons I give you, now is not the time!).I received a copy of this book in exchange for an honest review. I discovered this book because I’m a proud member of Rosie’s Book Review Team!

Actress Derry O’Donnell, moonlighting as fortune-teller Madam Tulip, finds herself in a famous pop singer’s entourage. But at the star’s glittering birthday party in the Dublin mountains, Derry finds a band riven by rivalries and feuds. Behind the trouble is a mysterious Russian guru, a shaman hated by everyone but the singer whose life she dominates.

When the shaman mysteriously disappears, suspicion threatens to tear the band apart. Was she victim or poisoner? Guilty or innocent? Dead or alive?

Two brilliant and beautiful musicians; an ambitious band manager with a shady past; a sax player entranced by Vikings–each has a secret to share and a request for Madam Tulip.

Derry O’ Donnell, a talented but at the moment jobless actress, along with her friends, rising TV star Bella and ex Navy SEAL Bruce, have secured a three week run for their fledgling theatre company. Pat Kelly, pub owner and band manager, has offered a room above the pub as a venue. But first Derry was required to grant a favour and become her alter ego, Madam Tulip, for a party. Pat Kelly manages pop group Maramar and is hosting a birthday bash for the lead singer, Aileen.

Madam Tulip was born as a means for Derry to make some cash when jobs were scarce. Not that she was a fraud, she was the daughter of a seventh son of a seventh son and was a skilled tarot and palm reader which she practices withy integrity. However, all too often her other persona had lead her into situations she would rather have avoided. But it seems without Madam Tulip the theatre company would be a no-go.

Almost as soon as she arrives at the retreat in the Dublin mountains, Derry is made aware Pat Kelly wants her to compromise her moral principles.

“Gloom settled on Derry like a cold fog. She felt the energy drain from her body. Why did people always want something you weren’t selling and shouldn’t sell? Predictable. Tedious. Wearying. Too depressing to be merely a bore.”

During the weekend Derry finds herself an unwitting confidante for Aileen’s insecurities which lead her further into the dramas and obsessions that seem inherent with the level of success achieved by Maramar. More problems and suspicions arise when Aileen’s shaman and therapist Kira, who is distrusted and disliked by most, disappears.

Madam Tulip and the Serpent’s Tree is told mainly from Derry’s third person perspective. It’s to David Ahern’s credit that the writing, engaging and enjoyable in itself, is also extremely visual and witty, with a smoothly flowing narrative. Diverse and colourful characters are fabulously realised. My favourites, Derry who is feeling conflicting emotions about her role as Madam Tulip and Bruce…who wouldn’t want a friend like Bruce.

“The sensation of becoming Madam Tulip was familiar but more intense than Derry had ever experienced. She had the strangest feeling that Derry O’Donnell, actress—the person whose body and brain she had inhabited all her life—had evaporated.”

Derry and Bruce are drawn into intrigue and much danger with a very atmospheric and dramatic conclusion that included two of my worst nightmares, fear of heights and claustrophobia, rising to to the surface. Those scenes might just have been described a little too vividly.  Offsetting the drama and adding a comedic element are Derry’s parents, Jacko and Venessa, who are in opposition over the book Jacko is supposedly writing.

An excellent addition to a series that includes mystery and suspense with a touch of romance, and one which I hope will carry on.

Actress Derry O’Donnell, moonlighting as fortune-teller Madam Tulip, finds herself in a famous pop singer’s entourage. But at the star’s glittering birthday party in the Dublin mountains, Derry finds a band riven by rivalries and feuds. Behind the trouble is a mysterious Russian guru, a shaman hated by everyone but the singer whose life she dominates.

When the shaman mysteriously disappears, suspicion threatens to tear the band apart. Was she victim or poisoner? Guilty or innocent? Dead or alive?

Two brilliant and beautiful musicians; an ambitious band manager with a shady past; a sax player entranced by Vikings–each has a secret to share and a request for Madam Tulip.