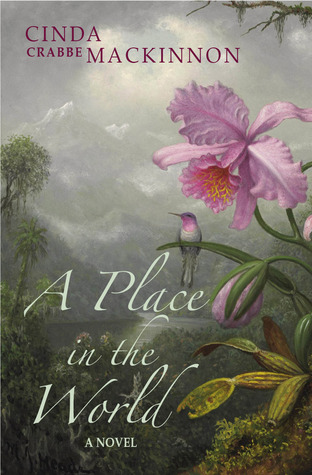 A Place in the World by Cinda Crabbe MacKinnon

A Place in the World is set in Colombia and begins in 1971. Alicia Carvallo is the 22 year old wife of Jorge. They live on a coffee finca which is like a farm or plantation. The moment I read the description of the finca being in a cloud forest I began falling in love with the beauties described. The flaura and fauna were so well written that you could almost hear the birds calling and feel the moisture on the leaves.

The finca is known as Las Nubes, there is no mains electric, no piped water, no telephone, and the roads are often just tracks. The couple moved to the finca when they got married and we learn all about coffee growing as Alicia discovers the wonders around her. She takes notes and sketches and years later her notes show rare and undiscovered species of life.

They live a simple life, they have Carmen to cook and keep house for them and locals help pick the coffee during harvest, the cloud forest is ideal as it provides a constant growing season for the coffee. There are hardships too; a road accident, bandits and the Charimpo volcano which erupts covering the ground in ash and burning the coffee plants with acid rain. But through all this the author fills you with the Colombian people, their way of life and how they accept outsiders.

I enjoyed the role of Peter an American prospector who came in and out of their lives, plus the outside influences on their lives; the coffee trade at the mercy of politics, the weather and the market. We heard that as soon as the market price rose the Colombian government increased taxes on coffee forcing small farmers to make decisions for their families which led to them growing drugs to keep them out of debt, this encouraged the drug cartels to be even more powerful.

This book took me to a new world, that I’d never given much thought to and I really enjoyed it.

Cinda will be our guest here on the blog tomorrow, do come back and read more about her and her book.