Chris has been reading Ronaldo: The Flying Reindeer Academy by Maxine Sylvester 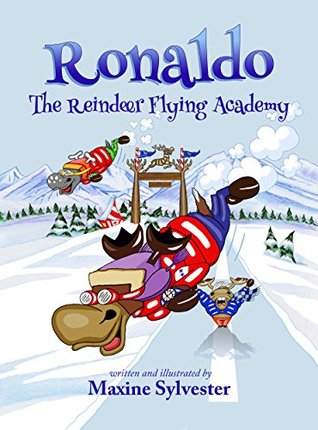 Thoughtful, witty, cute, and action-packed, this is a wonderful children’s story.

Ronaldo is not the best cadet at the Reindeer Flying Academy, but hopes to grow up to become one of Santa’s reindeer, like his hero, Vixen. When the day of the Endurance Challenge arrives, Ronaldo and his best friend Rudi gear up to take part and hopefully beat the rather nasty Dasher in the challenge. And so the adventure begins…

With peppy dialogue, wit, and a good dose of action, this is a fun read. The book also does a good job of showcasing the topic of finding one’s inner strength despite the odds. And who can resist a lovely reindeer protagonist? Recommended.

Ronaldo is the top flying cadet at the prestigious Reindeer Flying Academy. He dreams of getting his flying license, just like his hero, Vixen.
In this first exciting chapter in the ‘Ronaldo’ series, our hero is faced with his toughest flying test ever – The Endurance Challenge!
Can Ronaldo triumph over mean bully, Dasher, and win the ‘Golden Wings’ medal? Spurred on by Rudi, his quirky, loyal best friend and with a belly full of his favourite carrot pancakes, Ronaldo takes on the challenge of his life!

I was born in Hounslow, Middlesex in the south of England. As a child, I loved drawing and took private art classes with a wonderful teacher called, Pearl Lee. She had an abundance of Disney magazines, and I would paint the characters on wood, card, canvas or anything else I was allowed to use, including walls.

When I was nine, my mum took me on holiday to Majorca. I clearly remember being fascinated by how other people lived outside of England. Travelling became my new obsession.

After Sixth Form College, I intended to go to art school, but my travel bug got the better of me and chose to work as a holiday representative in Greece instead. This was followed by seven years working on cruise ships, two years in Israel and Palestine, and six years in Russia and Armenia. Although I lapped up the different cultures, I found my work over the years very unfulfilling. I decided to dig out my Caran d’Arche pencils, and do something about it!

I enrolled in The College of Cartoon Art and was mentored by the renowned caricaturist, Steve Chadburn. I created a character called Ronaldo and decided to write a short story about him. Before I knew it, my head was spinning with ideas and the first book, The Reindeer Flying Academy, went from a small picture book into a fully blown chapter book … but more importantly, I loved every minute of the writing and illustrating process.

Nowadays, I live in Bali, Indonesia, with my amazing partner, Mark, (Bristol born and bred) and am currently illustrating the third book for the Ronaldo series, Rudi’s Birthday Extravaganza.

I am still a self-confessed Disney geek and get excited as a five-year-old whenever a new Disney animated film comes out. I love the Disney theme parks and have visited Orlando, Paris, Hong Kong and Tokyo – California and Shanghai are next on my bucket list.

I have an unhealthy fondness for pizza and chocolate but a healthy love of Pilates – I like to think they balance each other out.

And finally, I am a lifelong Arsenal supporter … although sometimes I wish I wasn’t!