Today our guest on the Mystery Book Tour is Carl Albrecht and his book The Sand Bluff Murders. 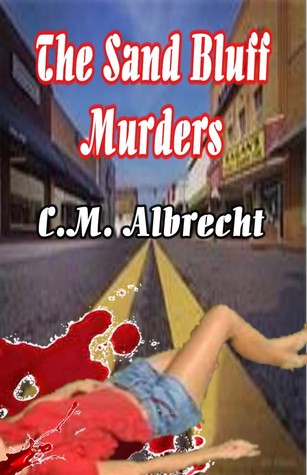 I write under the name, C. M. Albrecht, but my friends call me Carl. Lord knows what my enemies might call me, but fortunately I don’t believe I really have any.

Although I sometimes talk tough when I write, I’m really a pretty meek mild-mannered fellow. I’m not a thrill-seeker. I don’t go sky-diving, base-jumping and I don’t take any of those wonder drugs they peddle on TV (the ones that are clinically tested and so miraculous but carry along with them life-threatening side-effects).

Save for a stint in the army, I spent most of my formative years in Portland, Oregon. I loved it there, partially because, from my reading, I felt it must be a lot like London. Old bridges over a wide river. Dark narrow streets, cloudy skies and drizzling rain over cobblestone streets lit at night by the pale light that glowed from fog-clouded streetlamps. That was my Doyle and Dickens stage. Most, if not all, the cobblestone streets are long-gone now and sometimes, visiting, I scarcely recognize the Portland of my youth.

After a lot of travel and moves and the discovery of my soul mate, Irma, we ended up in Sacramento, California. We’ve been here for about thirty years now, not because we’re so enamored with the capital, but rather because we’ve grown used to it and it’s probably as good a place as any.

I’ve always loved mysteries, starting with Emil and the Detectives and then Sherlock Holmes and that has been a fascination that has never gone away. I loved mysteries so much that, as a still callow youth, I went to work for a private detective agency. It was a good job in many ways, but sadly, nothing like in the books. No guns, no violence, no beautiful blondes in distress; just stuff like going into stores undercover to catch thieves; mundane stuff like that, and personally, although I have no sympathy for thieves, etc., I still don’t feel capable of befriending one just to betray his trust later on.

I love all sorts of mysteries. I love Jane Marple and Hercule Poirot as well as Tommy and Tuppence. I love Ngaio Marsh tales, Lord Peter and Ellery Queen and Philo Vance, Nero Wolfe, Perry Mason, Donald Lam, and I love darker mysteries with characters like Marlowe, Archer, and Sam Spade. These are the detectives I grew up with. I’m less familiar with more modern authors mostly because I spend more time writing now than reading.

Where si your book set?

I set The Sand Bluff Murders in a small town because I’ve always located my stories in cities, and when re-reading an old Marple tale, Something she said struck a chord in me: “Human nature is much the same in a village as anywhere else, only one has opportunities and leisure for seeing it at closer quarters.”

I thought how neat it would be to write a story set in a small village. Unfortunately, out here in the Wild West where I live, we don’t have villages quite like St. Mary Meade, so I settled for the small town of Sand Bluff in Northern California. Sand Bluff is a wide spot in the road, long ago bypassed by the freeway, a little town where, according to one elderly local, “Most excitement we ever seen here was that time back in sixty-two whenever that Elvis tour had to stop in town to fix a flat.”

The visitors who do take the trouble to pass through Sand Bluff come mostly to stop at the Blu Lite Lounge to raise an elbow and pass an hour in air-conditioned comfort.

Tell us about the Police officers in Sand Bluff.

Sand Bluff has a very tiny police force with very light duties. An occasional speeder, the rare shoplifter (usually a hitchhiker wandering through town), or maybe they have to break up a minor brawl at the Blu Lite. There’s complacent Chief Raymond Castillo, a paunchy, somewhat garrulous man with a sweet wife and a couple of kids ready for college, there’s Harold Ackers, the new cop, somewhat naïve, even gullible. Carson Mohr on the other hand is the cop everybody naturally hates. He’s cocky, arrogant, puffed with his own hubris, and he loves to show that he’s in charge of the situation, no matter how petty, standing with legs apart, hands on his hips and that cop stare as he implies that his poor victim is a born liar, no matter what the occasion.

Introduce us to Jonas McCleary.

Jonas McCleary, the new guy, is a non-assuming young man who has always been interested in law-enforcement. A few years earlier he took an exam in a medium-size city and got on the force. However, wearing a uniform, busting up domestic disputes, arresting drunks and hauling in shoplifters didn’t turn out to be the nice job he expected. When Jonas learns the town of Sand Bluff is taking applications for a detective, he dives right in, not even stopping to wonder why a town with a three-man police force would want to hire a detective. Being good at tests, Jonas gets in and finds himself Sand Bluff’s only detective. He gets to pack iron and a badge, wear plain clothes and Chief Castillo even allows him to use his own ’72 Chevy pickup to cruise around in. What a deal! Now only one item remains on Jonas’ wish list; he’s nearly thirty years old and he’d really like to find Miss Right, get married and settle down.

On his second day in Sand Bluff, Jonas already has his eye on Roxie Hathaway. Roxie runs the town’s printing shop and weekly newspaper. Jonas likes her looks immediately and promises himself he’s going to get to know her better. But on his third day, trouble.

Before dawn, Officer Ackers comes upon a man lying in the alley behind the Blu Lite. Okay, the light isn’t good, and Ackers thinks the man is just a drunk. He drags the man to the cruiser and takes him to headquarters. Once there someone points out to Ackers that his uniform has blood stains down the front and the drunk is dead. Turns out someone gave him a double tap.

Being Sand Bluff’s one and only detective, Jonas is assigned the case. But before he can even get off to a good start, the body of Twyla Peters, Sand Bluff’s registered hussy, is found lying in a pool of blood.

Now Jonas really has his hands full. Who is the first victim? Is there somehow a connection between the two murders, or it is all a nasty coincidence?

Tell us about some of the other quirky characters in your book.

As Jonas begins his investigation he runs into Jessica aka Lester, a cross-dressing “little person” whose significant other is a huge weight-lifting black man named Terrence. Together they run the Bide-A-Bit Trailer Park and on the side, Jessica trains dogs.

Out at Oak Park, there’s ex-Beverly Hills cop and wannabe cowboy named Randolph Whitlock who, with his sister runs the horse ranch they inherited a few years back. He still thinks he’s the movie star he wanted to be but never was, and the list goes on.

Jonas and Roxie hit it off pretty well, despite the fact that she has a young son who wants to be like Yoda when he grows up. Jonas and Yoda even hit it off and soon Roxie is right in there helping Jonas as another corpse turns up and the mystery becomes more confusing than ever.

Is Jonas helped or hindered in his search by the town residents?

Before this duo can hope to bring this case to a conclusion, they both walk down some dark alleys and face grave danger — and they can’t expect much help from anyone else.

“The Sand Bluff Murders is a really good read, with plain and refreshing dialog and believable, sincere characters. C.M. Albrecht has presented the reader with a real-life detective who is impossible not to like and respect. I really enjoyed reading The Sand Bluff Murders as there were just enough twists and turns to make it exciting and keep me reading until I found out “who done it.” I highly recommend this book to all mystery/detective fans. The Sand Bluff Murders has all of the makings for a weekly TV show. This is the first in a series and happily there will be lots more of Jonas McCleary and his detective prowess to look forward to.” — Trudi LoPreto for Readers’ Favorite.

(Speaking of looking forward, Jonas already has a new mystery called The Morgenstern Murders. He may just have a future in the detecting business.)

At the moment, I’m working on another Jonas McCleary mystery involving a famous painter and big TV personality. I think it’s going to be okay.

My books are available through my publisher, Cambridge Books, http://writewordsinc.com, amazon, nook and all reputable (and perhaps some unreputable) sites, at least in the USA and the UK.

I have a blog at http://cmalbrecht.wordpress.com I don’t keep it up as well as I should, but I do try to add a little something of interest whenever I can.

I have my website as well at http://theinvestigators.webs.com where you can see my books and a few things.