Teri has been reading Heartbreaker by Dan Cummings 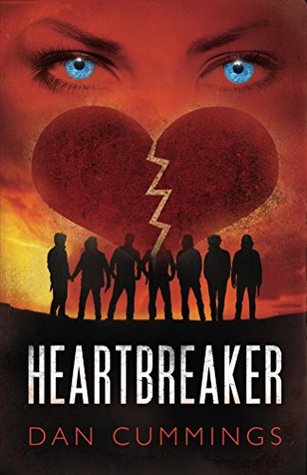 Well – who wouldn’t like this premise – unfaithful men being punished?  Except for the men maybe?  And they are truly punished in horrific ways in this novel.

I have to admit, I had some difficulty getting into this book.  The first half contains several scenes and pages of typical guy banter between Antony and his friends that might be amusing, but don’t do much to advance the plot, so I skimmed through those sections.  Descriptive writing is obviously important to any novel, something at which this author is very skilled, but some passages contained so much it detracted from the story.  A little can go a long way in putting images in the reader’s head.

The second half of the novel is when things begin to happen and the action escalates.  Pacing was more to my liking and the suspense is heightened when some of the characters catch the eye of the ‘ancient evil’ and are recruited as servants, with minor characters moving to the forefront and playing bigger roles.  Surprising betrayals among friends, in more ways than one, are also discovered.

Heartbreaker contains an unsettling, yet satisfying horror story with a creative story line, but the reader may have to be a little patient in getting to the heart of it – no pun intended.

In the quiet Californian town of Wood Fall, an ancient evil has awoken, preying upon the dreaming minds of unfaithful men.
Taking the physical form of their most desirable women, she enraptures some of her chosen, reducing them into mindless, homicidal servants, ready to stalk and abduct other sacrificial love cheats.
However, during her latest spell of activity, she finds herself attracted to a young man called Antony Pickett, who, unlike her usual targets, is pure of heart and in great pain.
Unfortunately for Ant, he is blind to the root of his heartache, a blindness which she is happy to remedy for him at a deadly cost.

Dan Cummings is a nerd with a short attention span and shorter fuse (depending on poor sleep), but when he is able to stop arguing with his own internal monologue and focus for a few minutes he enjoys putting the noise in his head on to paper. A lifetime fan of monsters, comic books, sarcasm and casual violence, it is inevitable that these constituents regularly crop up in his books. Heartbreaker is his first foray into horror, whilst Sparks: Welcome to the Madhouse, is the first instalment of an on-going supernatural, action/adventure series.