Infinite Stakes is the sequel to Breaking Point; two books set during World-War-Two. Eleanor is a mathematician who previously created a model to predict conflict outcomes. However, her concept was treated as unconventional and went against many of the opinions of high-ranking officers and government leaders, but Churchill listened to her.

Following on from the first book, Eleanor is now asked to stretch her theory to Europe and predict the outcome of Hitler’s battle with Stalin and if and when America might enter the war.

Also returning to this story is pilot Johnnie Shaux, trained as an engineer and with an understanding of mathematics equal to Eleanor’s, Johnnie is given a break from flying Spitfires and is now sent to help test new aircraft. Later, he is once more employed as a squadron leader flying a different aircraft on low flying sorties along the French coast. Johnnie’s understanding of mathematics made him ideal at working out aerial attacks, while his unique style of leadership enabled him to create efficient flying squads.

As with the first book in this series I was enchanted by the story and the characters, they felt so real and I was easily drawn into their lives. The story format has changed in book two; it is led by an interview with Dame Eleanor set in 2020 and the narrative goes back and forth between questions from the interviewer and Eleanor’s answers, followed by a second timeline from the war period. It works well. As with the first book the author provides comprehensive notes at the back which I appreciated, particularly his explanation of how close he kept to real events and how he married the fiction with the truth. I found both books a delight to read and will happily recommend them to those who enjoy well-written war themed fiction.

1940: Hitler’s aerial assault on England reaches a crescendo on Battle of Britain Day when, against all odds, the Luftwaffe is turned back by the outnumbered pilots of Fighter Command.

Infinite Stakes—picking up where Breaking Point left off—puts you both inside the cockpit as the pilots duel and at RAF Headquarters with Winston Churchill on that fateful day and through the year that follows, when Britain must fight on alone.

Johnnie Shaux, a battle-hardened fighter pilot, now leads a squadron of brave American volunteers against superior forces until he is forced down and imprisoned as a POW.

Meanwhile, Eleanor Rand, a brilliant mathematician, is tasked to predict Hitler’s plans and to help persuade America to join the war.

Written with historical accuracy and page-turning speed, Infinite Stakes takes you to diplomatic conference tables with Churchill, Roosevelt, and Stalin, to desperate battles over France, and, finally, on another fateful day, to Pearl Harbor. 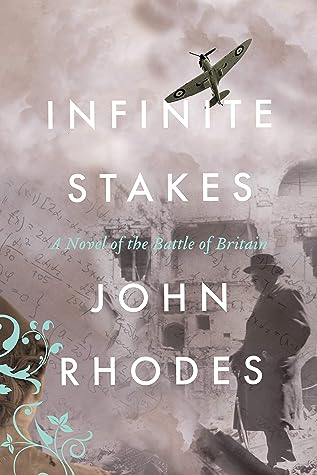 Breaking Point is a World-War-Two historical novel based on actual events during the Battle Of Britain. The story alternates between Johnnie, a spitfire pilot who is in the middle of the conflict, and Eleanor, a talented mathematician. She uses a theorem to help the RAF maintain superiority during the days surrounding the fight, when the odds look as if they are against them.

Johnnie Shaux is a pilot in 339 Squadron; every day that he comes home alive he’s beating the average pilot survival rate, but he’s realistic about his chances of continued existence. When the airfield his team use is bombed, they are moved to a reserve site which was once a village cricket green. The local villagers rally to provide food and shelter while a retired college professor is drafted in to transform the green grass into a working airfield.

Eleanor Rand works at the Air Ministry in London, her job is to put together air battle reports. With the Luftwaffe’s increased bombing raids against the RAF the figures look depressing. But Eleanor believes that she can do something more with the figures and she works out how best to deploy the dwindling numbers RAF pilots and place them where they are most effective against the larger number of German aircraft.

This was a very interesting story, I love well-written war tales, and I felt all the tension and terror as if I was right there with the characters. Taking to the skies with Johnnie was never dull and the air battle scenes were written in such a way that each one was understandable without it feeling like it was dumbed down for the reader. I enjoyed the camaraderie within the squadron too, especially when they weren’t flying, but the horrors of war were never forgotten or overlooked. Eleanor’s mathematical approach was so convincing and it made me believe it was totally plausible; the author did a really good job of making it appealing to this non-mathematician.

At the end of the book the author provides a series of notes, which were just as interesting as his story; I read them all. I’m now looking forward to reading book two of this series as Breaking Point ticked all my boxes for a really good piece of historical fiction from the world war era.

It is August, 1940. Hitler’s triumphant Third Reich has crushed all Europe—except Britain. As Hitler launches a massive aerial assault, only the heavily outnumbered British RAF and the iron will of Winston Churchill can stop him. The fate of Western civilization teeters in the balance.

Johnnie Shaux, a Spitfire fighter pilot, knows that the average life expectancy of a pilot is a mere five hours of operational flying time. Sooner or later his luck will run out. Yet he must constantly summon up the fortitude to fly into conditions in which death is all but inevitable and continue to do so until the inevitable occurs…

Meanwhile, Eleanor Rand, a WAAF staff officer in RAF headquarters, is struggling to find her role in a man’s world and to make a contribution to the battle. She studies the control room maps that track the ebb and flow of conflict, the aerial thrust and parry, and begins to see the glimmerings of a radical strategic breakthrough…

Breaking Point is based on the actual events of six days in the historic Battle of Britain. The story alternates between Johnnie, face to face with the implacable enemy; and Eleanor, in 11 Group headquarters, using ‘zero-sum’ game theory to evolve a strategic model of the battle.