Grave Dance is book two of the Alex Craft series of urban fantasy novels. Alex is a grave witch who can raise ‘shades’ (images and memories of the dead) to help with investigations. Called in to help with a case where only feet are left, Alex is frustrated by her inability to aid the police as much as she would like.

In a separate incident Alex and some friends are attacked on the street and a rift between magical planes is left at the scene. Someone is also collecting souls before the victims are due to die. But when her close friends are taken, Alex must cross to the fae world―and there may not be a way to return.

I downloaded book two as soon as I’d finished book one, as I wanted to know where the author would take us in the development of Alex and her fae skills. I was not disappointed; more mythical creatures and visits to the fae world added to the mystery storyline. This could easily become a binge-read series for me.

After a month spent recovering from a vicious fight with a sorcerer, grave witch Alex Craft is ready to get back to solving murders by raising the dead. With her love life in turmoil thanks to the disappearance of Fae Investigation Bureau agent Falin Andrews and a shocking “L” word confession from Death himself, Alex is eager for the distractions of work. But her new case turns out to be a deadly challenge.

The police hire Alex to consult on a particularly strange investigation in the nature preserve south of Nekros City. The strange part: There are no corpses, only fragments of them. A serial killer is potentially on the loose, and Alex has no way to raise a shade without a body, so she’ll have to rely on the magic of others to find leads. But as she begins investigating, a creature born of the darkest magic comes after her. Someone very powerful wants to make sure the only thing she finds is a dead end—her own.

Catch up with my review of book #1 in the series (Grave Witch) here. 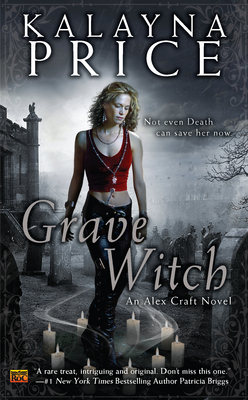