Garkain is an urban fantasy set mainly in Australia. Raised through the foster care system in America, Amelia has recently been reacquainted with her real family, but she discovers that they are a family of Garkain, a branch of vampires. Amelia is told that she is a special child because her parents were a Garkain and a Larougo, similar to a werewolf, but from a forbidden union. Members of The Colony invite Amelia to visit their home to take part in an unbinding ceremony to unlock her paranormal powers. Just what those powers will be can only be speculated upon.

I liked the idea of the Australian setting, which was refreshing in this genre, but I thought that the story needed to put more emphasis on the Australian context, particularly with the dialogue and historical background. The storyline worked well, but occasionally it was rushed and left me wanting more details or explanations to make it all believable. The last third of the story was the weakest and I thought it needed a bit of reworking especially with the odd epilogue; it introduced new details which I felt would have worked better in the main narrative. This is the first story in this series and there were hints of what is to come, but I wouldn’t say that the ending hooked me enough to want to continue.

I read an ARC of this story, so some of my concerns may be resolved with the final publication.

Amelia was dropped at a hospital in Houston 25 years ago. After searching for her biological family for years she receives a vague text: “It’s time for you to come home, we need you, the Colony needs you.”

The Colony is a secret society in the Outback of Australia, driven from Europe in 1788 to the prison colony of New Holland to begin anew. Her mother is Garkain, her father Larougo. Two different bloodlines, two different societies. One Vampire, one Werewolf. Given away instead of killed, she’s being called home for a purpose.

She’ll agree to things she thought she never would, become things she never thought existed, and agree to a bargain that will change the Colony forever.

The Librarian’s Vampire Assistant is a paranormal mystery romance, and is book one of a series. Michael has come to Phoenix to find out how his friend and sire died.

He meets Miriam while getting his morning coffee; her string of bad luck intrigues him and he follows her to a library. It appears that Michael is destined to save Miriam when she is viciously attacked, and he feels the need to continue to guard her, but he is also hunting a killer and things are about to get complicated.

I was interested in the premise of this book, and the opening scenes worked well. However, I found that the main characters never grew into the story. Michael had four hundred years of experience as an elite trained vampire yet I never got any real sense of this. Much of the plot felt like it happened behind closed doors, while assistance for Michael arrived too conveniently with post-action explanations.

Overall, I wanted to like this but it all fell rather flat and felt too contrived.

Who killed Michael Vanderhorst’s maker? It’s a darn good question. But when the trail brings Michael to hellishly sunny Phoenix, Arizona, his biggest problem soon becomes a cute little librarian he can’t seem to stay away from. He’s never met a bigger danger magnet! Even her book cart has it out for her. And is that the drug cartel following her around, too? “Dear God, woman! What have you gotten yourself into?”

Can this four-hundred-year-old vampire keep his librarian safe and himself out of hot water? Can he bring his maker’s killer to justice? Yesterday, he would’ve said yes. But yesterday, he didn’t have a strange connection with a librarian. Yesterday, people weren’t trying to kill her. 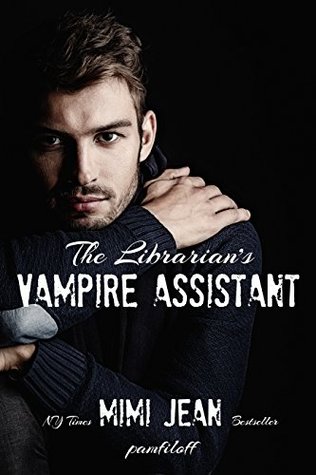