Georgia has been reading Night Service by John F. Leonard 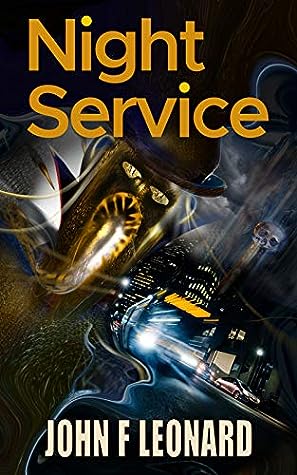 Some places don’t appear on any maps. Newgate Wood is one of them.

Luke and Jessica are travelling home after a date and make the wrong choice. They should have taken a taxi, instead they hop aboard the night bus. Big mistake. Surrounded by a cast of colourful characters they soon notice that the bus doesn’t stop again, in fact it only travels faster and faster into a night they no longer recognise.

What waits for them at the end is the hellish nightmare of Newgate Wood.

I have thoroughly enjoyed every one of Leonard’s books that I have read, and this is no exception. This is another short one, but it needs to be. The story races along leaving you breathless, but I loved the building terror for poor Luke, the atmospheric descriptions and this author’s writing.

Highly recommended for all who enjoy a darker read.

It’s been a great night, but it’s getting late. You need to make tracks and cash isn’t king.

No worries… all aboard the Night Service. It could be the last bus you ever catch.

Every journey is a journey into the unknown, but this trip is an eye-opener, unlike anything that Luke and Jessica have ever experienced. They’re going to learn a few important lessons. Being young and in love doesn’t grant immunity from the everyday awful… or the less ordinary evil that lurks in the shadows.

There’s no inoculation from the horror of the world – it’s real and it’s waiting to touch you.

Robbie has been reading Night Service by John F. Leonard

I love the way this author writes. He uses short and sharp sentences and paragraphs which make you become part of the action and the horror. He also uses marvelously descriptive verbiage to bring his scenes alive and it definitely works for me. Some examples from the first page of what I mean in this regard are as follows:
“A few steps and everything changed.” – the first sentence. “They left the main drag and the night unfurled.” I love these short and punchy lines.
“The sort of place where getting hurt was to be expected, just an unavoidable consequence of being there.” and “There was nothing but a lonely field of darkness, fragranced with the unsweet smell of desertion.” For me, I had the chills just from reading the first page and a clear expectation of what was coming.

Luke and Jessica have been on a date which he expects to progress to an overnighter, but they need to get to her place. They decide to take the night bus as neither want to waste money and, after all, public transport is reliable and easy to use, barring the trawl through the neighbourhood to get to the bus stop and the wait.

Luke finds himself having some misgivings about using the bus and nearly decides to call a taxi, but Jessica convinces him that the bus is fine for their purposes. He agrees and that turns out to be a very bad decision.

His feelings of unease increase as other travelers gather at the bus station. A strange young woman with a baby, who seems quite out of context in the circumstances, a heavy-weight who appears drunk and disorderly, three tough-looking members of a band and a most annoyingly chatty elderly gentleman, who, on reflection, is also out of context in the setting. Luke has misgivings, but the bus arrives and he gets on. His journey to hell begins.

This book is not long so the author has limited time to build his world and bring the plot to its culmination. I thought he did a great job of creating this alter and creepy world which exists in parallel to the human world and which is real, but somehow not real.

The descriptions and world building gave me the same creepy and eerie feeling as The Langoliers by Stephen King, a short story I read as a young teenager, but which I have never forgotten. The monsters reminded me of H.G. Well’s morlocks, with the horrible tainted feeling you get when you read about them in The Time Machine. They is a disgustingly slimy suggestion to their looks and behaviour which gave me the shivers.

I really enjoyed this book and its interesting and unusual, but highly appropriate style, and think lovers of clever horror will enjoy this book.

It’s been a great night, but it’s getting late. You need to make tracks and cash isn’t king.

No worries… all aboard the Night Service. It could be the last bus you ever catch.

Every journey is a journey into the unknown, but this trip is an eye-opener, unlike anything that Luke and Jessica have ever experienced. They’re going to learn a few important lessons. Being young and in love doesn’t grant immunity from the everyday awful… or the less ordinary evil that lurks in the shadows.

There’s no inoculation from the horror of the world – it’s real and it’s waiting to touch you.