Sean has been reading Bonfire Of The Perfect by Susan Appleyard 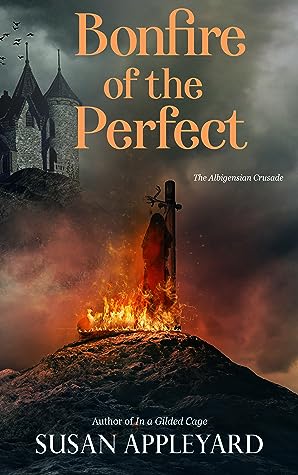 A historical romance novel, set at the time of the Albigensian crusade. For those who may not know, this was a crusade in the Languedoc region of France, by northern Catholics against the perceived heresies of the Cathars, lasting from 1209 to 1229, with another series of repressions in the late 1240s.

The plot is essentially the love story between Braida, a young Catholic girl of Carcassone, and Jourdan, a soldier-of-fortune, who is also Catholic, but is fighting against what they perceive as an invasion of the lands by the North. The narrator of the story wants to set out her own view of the times she has lived through.

Set in feudal times, the local counts, lords etc. have almost absolute power over their subjects, and in turn owe fealty to their overlords. The French king suspects the loyalty of the Languedoc, over which the King of Aragon has some sway, and under cover of the crusade seeks to gain control of the land. As ever, the poor and voiceless are the meat in the sandwich.

Braida: Young Catholic girl, very self-conscious due to a leg deformity, growing up in a peaceful, idyllic Carcassone. Friends with the Cather Beatrice, her father is a distant, cold man, who ignores or belittles her as needed.

Jourdan: Soldier of fortune, he is torn between his duty to his employer, and to Braida. Duty usually wins, and Braida is left behind.

Beatrice: A devoted Cather, studying to become a Perfect, she is Braida’s best (and probably only) real friend. Pious, she becomes more ethereal as the novel progresses.

Foulques: Braida’s physician father, he looms large over her life. Cold and unloving to her, as he grows older his life slowly falls to pieces, as personal tragedy takes its toll

The Albigensian Crusade has just been launched by Pope Innocent III, and the Northern army is marching to Languedoc. Braida and her contemporaries do not fear it yet, thinking it is just another local war that will go away. She meets and falls for Jourdan, and their early days are idyllic. However, as time moves on and the army closer, they get swept up in events.

The Viscount of Carcassone rallies the troops, and takes up arms against the Northern invaders.

A series of battles, skirmishes and sieges now occur, over the next 20/30 years, with duplicity, betrayal and widespread bloodshed becoming the norm. The bonds of loyalty are strained, and sometimes break under the pressure. The tide of war ebbs and flows, and throughout Braida and Jourdan have their own travails, Jourdan heads off to war, leaving Braida behind to look after her father, mother, and her father’s mistress, while never knowing where or when the hammer of war falls next.

Along with the Crusade comes the Inquisition, less famous but just as brutal as its Spanish counterpart. Braida and Jourdan are nominally exempt from this, being Catholics, but such is the fear and terror, that neighbour is denouncing neighbour, simply to avoid the clutches of the Inquisitors.

For those who like historical romance novels, this fits the bill nicely. A good overview of the turbulent times, and how two ordinary people struggle through it. The reader gets a good flavour of how precarious life was. It is enjoyable, and may lead the more curious to investigate and read more into the genocide of the Cathars.

Prompted by the murder of his legate, in 1209 Pope Innocent III launches a crusade – not against the infidels of the East, but against fellow Christians living peaceably in the south of France. They are the Cathars, regarded as heretics by the Roman Church, and the sect is flourishing. Thousands of knights, landless younger sons, mercenaries and assorted riff-raff pour south with Christian zeal to exterminate men, women and children of the same country. A dilemma soon arises: How to tell a Cathar from an orthodox Catholic?
Lovers Bräida and Jourdan are torn apart when Carcassonne falls to the crusaders. Jourdan joins the resistance while Bräida flees with her family to the relative safety of the Pyrenees, neither knowing if they will see one another again. But Bräida is not safe in her mountain retreat, because the Church has found an answer to its dilemma – the creation of the Inquisition. No one can escape its diabolical clutches.
This is a story of faith, endurance and the love of liberty in a time of unimaginable cruelty.