Sue Has been reading The Last Pilgrim by Noelle Granger 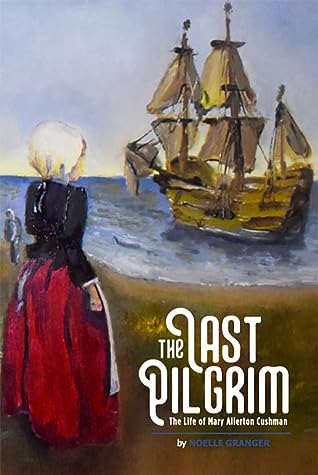 Since 2020 marks the 400th anniversary of the sailing of the Mayflower from Plymouth, UK to Plymouth, MA, I was interested in reading this account of the life of Mary Allerton Cushman. Mary was only four years old during the arduous journey made by the separatists, who later became known as pilgrims. Their story is well known in Massachusetts and taught from an early age.  I was keen to read this account written for an adult audience and was rewarded by a narrative filled with a great deal of well-researched historical detail. Some of the events were relayed in a slightly unemotional manner, there could have been more excitement during the description of John Howland having fallen overboard and his rescue, and also an episode in which one of the cross beams of the Mayflower cracks during a heavy storm. These events, the illness and death below decks must have been terrifying.

The beginning of the book introduces us to Mary in 1699, as an elderly woman, looking back on her life. We then switch to her father, Isaac Allerton, in whose voice most of the early chapters are written, switching to Mary occasionally, as she gets a little older. When Mary reaches the age of 8 she is put out to live with another family, that of the Governor of the Plymouth colony. Mary’s behaviour is unruly and her father has struggled to tame her since the death of his wife on the Mayflower. This event is useful since the narrator is now a party to the majority of conversations held within the Governor’s house and through these we learn of relations with the local natives, the problems relating to debt which follow the settlers and the subsequent trade deals set up by Mary’s father, which have detrimental effects on his relationship with the governor and eventually lead to his leaving the colony.

It was interesting to hear in detail the processes which Mary must learn in order to become a goodwife: soap making, cooking, spinning flax into cloth and how to catch leeches in a bottle from a river, to name but a few. The author clearly spent plenty of time researching every possible aspect of life in the colony and describes it in an engaging manner.

I recommend this book to anyone who enjoys Historical Fiction.  4.5/5

This book captures and celebrates the grit and struggle of the Pilgrim women who stepped off the Mayflower in the winter of 1620 to an unknown world – one filled with hardship, danger and death. The Plymouth Colony would not have survived without them.
Mary Allerton Cushman was the last surviving passenger of the Mayflower, dying at age 88 in 1699.
Mary’s life is set against the real background of that time. The Last Pilgrim begins from her father’s point of view – she was, after all, only four when she descended into the cramped and dank living space below deck on the Mayflower – but gradually assumes Mary’s voice, as the colony achieves a foothold in the New England’s rocky soil.
What was a woman’s life like in the Plymouth Colony? The Last Pilgrim will tell you.