The People of Ostrich Mountain by Ndirangu Githaiga

The People of Ostrich Mountain is a family saga and piece of cultural fiction. Set in Kenya, the story begins in the 1950s and introduces us to Wambũi. As a teenager she leaves her village to attend a prestigious boarding school where she meets Eileen Atwood, a teacher who would become her friend and mentor.

Although Wambũi is a gifted mathematician, she trains to be a teacher of maths so that she can stay close to her family and help them out financially. After her marriage she helps run a successful hardware store.

In part two of the book, we meet Wambũi’s grown-up son Ray and read of his struggles to become a medical student and later his successes in America. We also return to Eileen’s tale, who after forty years living in Kenya was forced to leave her job and return to England.

I enjoyed reading this and learning about Kenya and its history, particularly for those who lived and worked outside of the main cities. Some of my favourite parts were reading about Wambũi’s family hierarchy and their respect of family values. I also liked the story behind the book title which I won’t give away here.

As the 1950s Mau Mau war breaks out in the foothills of Mt. Kenya, Wambũi, a fourteen-year-old girl leaves her besieged village to join a prestigious boarding school a half day’s journey away by train. There, she becomes aware of her extraordinary mathematical abilities discovered by her teacher, Eileen Atwood. Initially, Wambũi views Eileen’s attentions with suspicion and hostility, but over time, the two grow close and form a lifelong friendship.
Unfortunately for Wambũi, the mid-twentieth century isn’t ready for a female math prodigy, particularly in Kenya. But she quietly and defiantly takes on the obstacles seeking to define her, applying her unusual gifts in new directions, which ultimately benefits her impoverished family and inspires her siblings and their children to pursue their own dreams.
After forty years in Kenya, Eileen unexpectedly loses her employment authorization and is forced to return to England, where she struggles to adjust to living in a country she barely recognizes. Meanwhile, Wambũi’s son, Ray, a doctor, navigates a fraught visa application process and travels to America to begin residency training; however, his hospital becomes insolvent and shuts down a year later. He and his colleagues are assimilated into other programs where, as foreign-born physicians, they endure relentless prejudice. As a black man, he also discovers that the streets of Chicago are sometimes quick to judge, with serious consequences.
A saga of family and friendship spanning five decades and three continents, ‘The People of Ostrich Mountain’ chronicles the interconnected lives of three outsiders as they navigate the vagaries of race, gender and immigration.

E.L. has been reading Forbidden Fruit by Stanley Gazemba 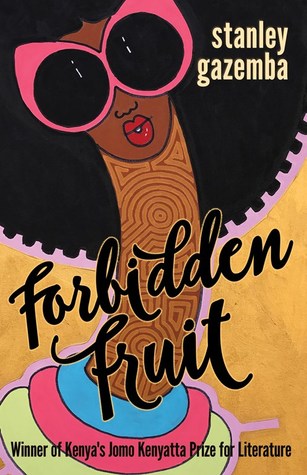 Forbidden Fruit by Stanley Gazemba is a story about the frailties of human nature. Set in Western Kenya, it offers the reader a glimpse of what life is like for peasant villagers struggling to make ends meet against a harsh and unforgiving landscape.

From the onset it is clear that Gazemba has a gift for descriptive writing as he brings to life the back breaking existence of being a farm labourer. The peasant farmers live in compounds in basic huts. Their lives are shaped by poverty although the customs and traditions that they live by afford them some enjoyment. For example at Christmas they form a choir and the children decorate the outside of the huts by daubing them with white clay mixed with the juice of pumpkin leaves. In contrast the landowner enjoys the luxury of living in a big, splendid house with servants to wait on him.

Life for the peasants is framed around a patriarchal society. The women have to work alongside the men in the fields but also have to take care of children and tend to the housekeeping. Cleaning and cooking is the domain of women who risk a beating should they be late home to attend to their chores. Custom also demands that women are covered and wear head scarves. Only the daughters of the landowner fare better as they are educated abroad and have careers.

Although there is a low key sense of tension running through the novel it moves at a gentle pace perhaps in keeping with the rhythm of life in an African village. The most striking element of the story is the way Gazemba develops his characters and shows them to be deeply flawed. The male characters are the ones who drive the story forward towards a disastrous finale whilst the women are forced to suffer the consequences.

The main character is Ombima, a poor middle-aged farm worker who prides himself on his honesty but then goes on to steal from the landowner’s garden. It is this act that sets in motion a dangerous chain of events. Although it’s easy to forgive Ombima’s theft, given that his family is practically starving, the fact that he’s willing to point the finger of blame at other equally vulnerable characters makes him less sympathetic to the reader. Deep down he resents his poverty and is bitter that he missed out on an education as when his father became disabled he had to become his family’s wage earner.

His friendship with Ang’ote is complex as superficially they are close but beneath the surface resentment and jealousy threatens to consume them and indeed leads to a terrible act of treachery. Ang’ote gives the appearance of being a generous, unkempt, free spirit but there is a darkness lurking within whilst Ombima likes to feel superior to his friend’s chaotic lifestyle. Through the two men’s relationship, Gazemba explores the idea that poverty, rather than bringing people together, drives us to exploit our differences in order to feel superior to someone else. History has taught us the truth of this as society creates a hierarchy and no one wants to feel like they are at the bottom.

It is the female characters who are the heart of the story. Ombima’s wife, Sayo, is gentle and uncomplaining; making the best of what life offers her no matter how unfair that may be. Rebecca is an older woman who has been left to care for numerous grandchildren as their mothers have fled to the cities in the hope of a better life. She is a beautiful woman who has been ravaged by the sun, hard work and the harshness of a life of poverty. She is though very wise and morally sound, she cautions Ang’ote to “learn in life to accept yourself for what you are.”

The most complex female character is Madam Tabitha, the wife of the rich landowner. She is trapped in a loveless marriage and her dissatisfaction and need to feel wanted cause her to behave in a way that has disastrous consequences. She is clearly an intelligent woman, working as a school mistress, and she shows compassion to the villagers also urging her husband, Andimi, to do likewise. She looks back on the way she had her head turned by Andimi with a bitter sense of regret. At the same time, however, she enjoys the luxury of having nice things and living in splendour.

What I found particularly interesting about Forbidden Fruit is the way Gazemba depicts the complexity of communities. It’s easy to idealise the idea of everyone pulling together and supporting each other and to a large extent this is shown to take place, especially in times of loss. However, the compounds are also riddled with petty jealousies and divisions. For example, Ngayira is a witch who people are happy to take their sick to for help but then they turn on her when things go wrong, blaming her for cursing their livestock etc.

Gazemba uses his novel to show the good and bad sides of human nature. We are all flawed and this is starkly apparent in a small community. I really enjoyed Forbidden Fruit as it’s gentle and thoughtful. If you’re interested in reading about other cultures and the universal themes that connect us all then this is one for you.