Lilian and the Irresistible Duke by Virginia Heath

Lilian and the Irresistible Duke is book four in the Secrets of a Victorian Household series of historical romances. Each book in the series has been written by a different author, but the characters from each one are closely connected.

Lilian’s three grown-up children have persuaded her to take a well-deserved holiday away from The Fairclough Foundation, a safe haven for destitute women in London. Lilian is looking forward to her visit to Rome; it brings back memories of a secret but delightful kiss from Duke Pietro Venturi.

Pietro Venturi is surprised to bump into Lilian in his home. Knowing that she is a widow he suspects that his sister is trying to matchmake, but when Lilian insists that she is only looking for friendship he relaxes and instead delights in their joint love of art.

This romance involves characters who are older than many others in this genre, but there was still plenty of enticing ardour. I liked Lilian’s passion for art as seen from her unique perspective, and although I’m not generally an art lover, this book had me wanting to see some of the paintings that were mentioned.

This is a stand-alone book which can also be enjoyed as part of the series, or for those who might fall in love with Rome.

A reunion in Rome… sparks an affair to remember!

Responsible widow Lilian Fairclough is persuaded to travel to Rome for a hard-earned break and to let down her hair! She’s surprised to be reunited with passionate, cynical Italian duke Pietro Venturi. He reawakens her sensual side and intrigues her with glimpses of pain beneath his rakish surface. Enticed into a secret and temporary affair, what will happen once she returns home? 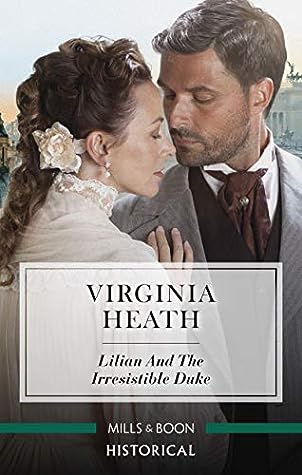 Although I have not read book one, this book is easily a stand-alone story.

Millie’s family run The Fairclough Foundation, a safe haven for destitute women in London. This story is set just before Christmas, when Millie and her mother are visiting relatives in the countryside.

When a blizzard forces Millie to seek shelter in a gatehouse, she meets Cassius Whitlock. He cannot turn her out into the night, but in their strict society it is inappropriate for them to be alone together. With the weather as it is, though, he cannot send her away.

The next morning Millie’s footsteps in the snow leave a glaring trail from his door, and gossip quickly spreads. Having put them both in an uncompromising position, Cassius must act quickly to clear up the situation.

Both Millie and Cassius were characters that I immediately liked and their story was delightful to read. The strict Victorian rules of etiquette guided this story but I did enjoy how the couple worked to bend those conventions on more than one occasion.

I was intrigued by The Fairclough Foundation and if I get a chance to read the other books in this series, I’m sure I will be able to read more details about it.

Overall, a lovely new series for fans of this genre.

When Amelia Fairclough had sought refuge in a blizzard, a brooding stranger had given her warmth and shelter. She’d even tried to soothe him of his demons in return. But as she scurried home at dawn she was spotted! Now he’s in the parlour, offering to do the honourable thing. Surely she’d be a fool to turn down the new Marquess of Falconmore!?