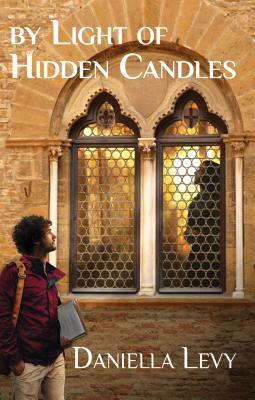 My Review: 4 stars out of 5 for By Light of Hidden Candles by Daniella Levy

As part of an urban renewal project some years ago, an old building that used to house our family’s dry goods store was scheduled for demolition on Chicago’s south side. My sister was there, and was able to recover a box of family photos found in the walls. Inside were nineteenth-century photos showing solemn people from my Catholic father’s family wearing traditional flat black hats and clothing with embroidered Magen David (Star of David) for the men, and matching jewellery on the women.

While some of my relatives were surprised (“I never knew he was a deputy sheriff,” said one great aunt on seeing the six-pointed star on one man’s waistcoat), several of my cousins and I thought it confirmed what we’d long suspected, and what some of our family traditions (not to mention recipes like those triangle-shaped cookies!) seemed to support. One older relative told me that he didn’t understand kosher laws, but he just thought it was “disgusting” to serve milk with a meal that involved meat.

So when I started to hear stories about families in the American Southwest who secretly practiced Jewish traditions for generations while publicly claiming to be Christian, I was intrigued but not surprised. In her new book, By Light of Hidden Candles, author Daniella Levy takes this one step further. Using the device of an heirloom golden ring, she tells a parallel tale of love, religious devotion, and a mystery that spans five hundred years.

The story starts with Miriam, on her deathbed, handing over a gold ring to her granddaughter along with the story of her rescue from the Inquisition by a young member of the Spanish nobility. She makes the young girl promise to continue efforts to return the ring to its original owner, even if it means handing it down to her own daughter along with the kebubah (marriage contract) from each generation of Miriam’s descendants.

Miriam’s story continues, interspersed with the contemporary stories told from the point of view of Alma, a young Orthodox Jewish woman living in New York, and Manuel, a student from Spain who is considering becoming a priest. They meet when a curious Manuel stumbles into her family’s Judaica store, and again when they discover they will be starting the same program at NYU for those who want to research their family’s roots in Spain. Alma, the latest recipient of Miriam’s ring, is seeking the descendants of the young aristocrat who saved her ancestors from the Inquisition, while Manuel wants to complete his dead father’s dream of tracing their family roots.

Arriving in Spain, the two are paired as research partners. Together they investigate the mysteries of their family past, while also fighting a mutual attraction which neither is prepared to acknowledge. Alma educates the interested Manuel on the difficulties of keeping kosher, while he provides a native’s introduction to his home country.

I particularly loved the bubbly, funny, directionally-challenged Alma. Although she has doubts about herself and her future, she’s secure in her own personal and religious identity. The other main characters, Miriam and Manuel, weren’t so well rounded to me. In Miriam’s case, it was understandable. She was very much the medieval Jewish girl, completely a product of her time and place. Her growing attraction to the young Spanish nobleman who saved her and her father from the Inquisition was treated with a light touch, realistically portrayed against the barriers of class, culture, and religion.

Manuel—the potential priest with a supposed attraction to all things Jewish—was a bit harder to get my head around. The truth is, it’s really hard to be Jewish, and there is almost no tradition of seeking converts. In fact, traditionally a rabbi who is approached by potential converts is required to make three attempts to discourage them. I could see why Manuel might be interested in Alma, but just had trouble buying his instinctive attraction for Jewish traditions and religion.

But Alma and Manuel’s joint searches through ancient records, the excitement of their individual discoveries, and the 500-year-old mystery slowly unravelled in Miriam’s chapters are so much fun that I was able to overlook the pages of soul-searching and angst. It was fun to try to outguess the author and see where all three characters’ journeys were leading. It was also fun to see so many of the traditions I’m familiar with, along with many I didn’t know about. I found the ending just a bit too pat, although against the weight of a five hundred year old secret, it managed to feel almost inevitable.

I’d recommend By Light of Hidden Candles to anyone who enjoys historical romances, gentle mysteries, and a realistic depiction of the challenges of conflicting religious beliefs. At one point, Alma thinks about her cousin David, now missing from family celebrations because of his decision to marry a non-Jew. “I imagined David holding Cathy’s hand, feeling free of the weight of all the generations that chained me…” I sympathised with her conflict even while cheering for the young lovers. And really—who wouldn’t love five hundred years of star-crossed romance and a mystery to solve?

In a mud hut in the Jewish Quarter of 16th-century Fez, a dying woman hands her granddaughter a heavy gold ring–and an even heavier secret.

Five hundred years later, Alma Ben-Ami journeys to Madrid to fulfill her ancestor’s dying wish. She has recruited an unlikely research partner: Manuel Aguilar, a young Catholic Spaniard whose beloved priest always warned him about getting too friendly with Jews. As their quest takes them from Greenwich Village to the windswept mountain fortresses of southern Spain, their friendship deepens and threatens to cross boundaries sacred to them both; and what they finally discover in the Spanish archives will force them to confront the truth about who they are and what their faiths mean to them.

At times humorous, at times deeply moving, this beautifully written and meticulously researched book will appeal to anyone interested in the history of Inquisition-era Spain, Sephardic Jews, or falling in love.

Daniella Levy is an Orthodox Jewish mother of three, rabbi’s wife, writer, translator, self-defense instructor, bridal counselor, black belt in karate, and certified medical clown–and she still can’t decide what to be when she grows up. Her articles, short fiction, and poetry have been published in both English and Hebrew in publications such as Writer’s Digest, The Forward, Pnima Magazine, Reckoning, Newfound, the Rathalla Review, and the Jewish Literary Journal, as well as online platforms such as Kveller, Aish.com, JWire, Ynet News, and Hevria.
Born in New York, Daniella immigrated to Israel with her family as a child. She wrote her first book at age ten and completed her first full-length novel at fourteen. Her Talmud studies notes from high school consisted of a series of silly dramatizations of Jewish sages yelling at each other. She’s pretty sure her teacher would have been horrified.
She blogs at LetterstoJosep.com about Judaism and life in Israel, and at RejectionSurvivalGuide.wordpress.com about resilience in the face of rejection and criticism. Connect with her online at Daniella-Levy.com.