Aidan has been reading Wasteland by Terry Tyler

Wasteland just got better and better as I was reading. It might start off slowly, since it’s worldbuilding is monumentally ambitious, but once it gets going it never slows down. The book has plenty to say about family, poverty, activism and democracy, social media, liberty… the list just goes on. I could spend all day dissecting its multifaceted themes. For me, it felt very reminiscent of the Children of Men film.

The novel is set in a dystopian version of the UK far in the future. Most of the population has moved or been moved into megacities – vast urban centres that can meet all needs, so that their residents never have to leave. The government controls almost every aspect of its citizens’ lives, and they are taught not to question. Outside the megacities is the wasteland, home to those who have escaped the government’s iron fist.

The story centres on Rae, a young woman who has grown up in the orphanage system within a megacity. Upon learning that her family might still be alive, she starts to question what it is that she wants. Along her journey, there is a constant flow of diverse characters – it’s a real strength of the book. We can see the effects of the harsh world upon a whole host of characters, which gives small insights into a whole host of differing viewpoints and allows for interesting discussions of the various themes.

While Rae’s story was great, and she evolved seamlessly throughout the book, it was Dylan’s journey that was a highlight. His part was relatively small, since he was a secondary character, but I believe it to be crucial to understand the human aspect of the government’s policies. He encapsulates the idea that luck has a lot to do with your position in the world, and I found it impossible not to feel for him.

I found that the themes of the book mesh together to act as a study of humanity. It painted a poor picture of us, often being very cynical. Yet, despite all the flaws it exposed, it manages to maintain a spark of hope throughout – the idea that no matter what, humanity will find a way. I also don’t feel that Terry Tyler’s exploration of themes in any way impeded the overall flow of the story, something I’m always wary of when books have a strong message. However, the ambitious nature of the novel did mean that some themes are only touched on at a shallow level. I didn’t find this an issue personally though, since there is more than enough food for thought.

In my opinion, the book really comes into its own in the last 3rd. There was a twist that I didn’t see coming at all, which was great, and then the pace is relentless from there on out. It’s one of those that I just couldn’t put down, since the tension and stakes are so high and I was hugely invested in the characters.

Overall, this book has made me really excited to read more of Terry Tyler’s work. It was really easy to read as a standalone book, despite kind of being a sequel (it’s set in the same world as another book, but many years later). My only small criticism is that the writing occasionally was a bit awkward, so I had to reread bits which I misunderstood because I’d missed a word that was in an unexpected place. However, it didn’t detract from my overall enjoyment, and would suggest that you don’t let it put you off in any way. Therefore, I give the book 6 out of 7, and would easily recommend it to lovers of sci-fi and dystopia. I’d also recommend it more widely, but warn that it can be quite bleak in places, so don’t go for it if that’s not your thing.

‘Those who escape ‘the system’ are left to survive outside society. The fortunate find places in off-grid communities; the others disappear into the wasteland.’

The year is 2061, and in the new UK megacities, the government watches every move you make. Speech is no longer free—an ‘offensive’ word reaching the wrong ear means a social demerit and a hefty fine. One too many demerits? Job loss and eviction, with free transport to your nearest community for the homeless: the Hope Villages.

Rae Farrer is a megacity girl through and through, proud of her educational and career achievements, until a shocking discovery about her birth forces her to question every aspect of life in UK Megacity 12.

On the other side of the supposedly safe megacity walls, a few wastelanders suspect that their freedom cannot last forever…

Wasteland is the stand-alone sequel to Hope, and is the second and final book in the Operation Galton series.

Welcome to Cathy Ryan, who also writes book reviews at Between The Lines Book Blog

I’ve just been reminded that Rosie’s Book Review Team is six years old! That means BetweenTheLines is also six years old. I joined the team a few months after I began my blog and am still enjoying the experience. Rosie does a great job coordinating everything and many books have come my way that I probably would have missed otherwise, and more than a few authors have become firm favourites, such as Terry Tyler, Carol Hedges, Adrienne Vaughan, Liza Perrat…the list goes on.

One book in particular, The Cunning Woman’s Cup by Sue Hewitt, which I enjoyed immensely and is one I’ve read more than once, sent me on search to find the stone circle in the story. It was a trek to find the Duddo Stones but it was worth it for the atmosphere and the view.

I enjoy following series and there are several murder/mystery ones I’ve enjoyed including The Victorian Detectives by Carol Hedges, Madame Tulip cosy mysteries by David Ahern and Inspector de Silva Mysteries by Harriet Steel.
Not only that, several of us have become ‘real life’ friends and meet up every so often, which is fantastic. Long may it last! 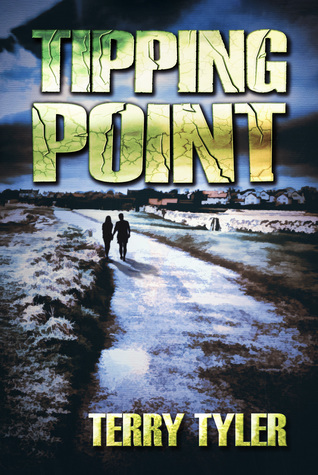 A big thank you to Rosie for inviting me onto the blog to talk about my new book, Tipping Point, which is released today.

I’ve been wanting to write about the collapse of civilisation due to a deadly virus for a while, and Tipping Point has been lurking on my desktop in note form for well over a year.  I’m fascinated by how people might survive after such catastrophes, when there is no power, no water, finite supplies of food, fuel and medicine, and, of course, no law.  But my story is not just about a random virus.  It’s about a re-structuring of the world, by the powers behind the thrones … could it actually happen?

The first part of Tipping Point is set in the fictional town of Shipden, in Norfolk, which I based on Cromer, where I used to live.  Shipden was the original name for Cromer, before medieval times, and part or all of this is believed to now be under the sea, out past Cromer pier.  The second part is set in Elmfield Village in Tyne and Wear, also fictional, and based on Monkton Village, which is near Jarrow.

Book Two of the series, Lindisfarne, is due for release in September.  It is set on the island of the same name, in Northumbria; I enjoyed several research trips there, wandering around in the pouring rain on freezing days last winter, taking videos!

Genre: Post Apocalyptic, Dystopian, Family Drama, and a bit of love stuff, too.

‘I didn’t know danger was floating behind us on the breeze as we walked along the beach, seeping in through the windows of our picture postcard life.’

The year is 2024. A new social networking site bursts onto the scene. Private Life promises total privacy, with freebies and financial incentives for all. Across the world, a record number of users sign up.

A deadly virus is discovered in a little known African province, and it’s spreading—fast. The UK announces a countrywide vaccination programme. Members of underground group Unicorn believe the disease to be man-made, and that the people are being fed lies driven by a vast conspiracy.

Vicky Keating’s boyfriend, Dex, is working for Unicorn over two hundred miles away when the first UK outbreak is detected in her home town of Shipden, on the Norfolk coast. The town is placed under military controlled quarantine and, despite official assurances that there is no need for panic, within days the virus is unstoppable.
More About Terry

Terry Tyler has published fourteen books on Amazon, ranging from family dramas and a novella about three writers, to a serial killer thriller and her current post apocalyptic series; what they have in common is that they are character driven and based around her interest in all things psychological. Several have won online awards.  She is an avid reader and book reviewer, loves The Walking Dead and Game of Thrones, and is a newly converted vegan who is still trying to work out what she can actually eat.  She lives in the north east of England with her husband.

and writes for a popular TWD fansite http://twdfansite.com/author/terry-tyler/