A Wife Worth Investing in: Penniless Brides of Convenience by Marguerite Kaye

A Wife Worth Investing In is an historical romance.

It opens with a Paris setting from 1828. Phoebe Brannagh has been studying under top chef Pascal Solignac. The only woman in his kitchens, she has dreams of opening her own restaurant. One evening she meets Owen Harrington, a young Englishman who is searching for his life purpose.

The pair agree to meet again in two years, when they will report back about their successes. Much happens in that time, and Owen does not make the rendezvous, while Phoebe’s own circumstances have changed dramatically. However, she is still determined to open her own restaurant, but, with few friends who could help, she seeks out Owen at his London home.

They agree to enter into a business venture, but is London society ready for such a bold move from a woman such as Phoebe?

I enjoyed the food theme of this book as well as Owen’s use of gymnastics, which added an unusual story thread; it worked well. I think this book would be much enjoyed by fans of this author and genre.

Part of Penniless Brides of Convenience: Knocking on Owen Harrington’s door, impoverished and desperate, Miss Phoebe Brannagh wonders if London’s most eligible catch will recognise her. But injured and reclusive, Owen is no longer a carefree man. And he’s in urgent need of a convenient wife! Owen’s shock proposal allows Phoebe to fulfil her life’s ambition to open a restaurant…but his heated kisses tempt her to hope for a new dream – marriage, for real! 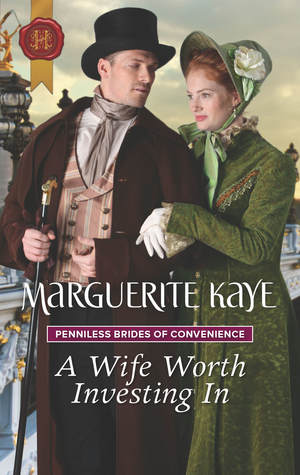 This book consists of two stories.

The Soldier’s Dark Secret (story #1 of the Comrades In Arms series) is a Regency romance. It opens in England in 1815. Jack Trestain has recently resigned his army commission and is staying with his brother’s family at Trestain Manor. Jack is suffering from recurring nightmares caused during his time with the Duke of Wellington in the Napoleonic wars.

Celeste Marmion is a French landscape artist. She has come to England to paint some pieces for Jack’s brother and to find answers to a family mystery. Estranged from her family for most of her life, Celeste’s late mother left her a letter hinting at family relatives that Celeste has never known.

Celeste is just the distraction that Jack needs, and he offers to help her search out answers. She has few clues; just a locket and a ring.

Once Celeste has finished her painting, they travel to France on the trail of lost relations. The search has a healing effect on both of them as their feelings for each other increase. This was an easy read, in places a little predictable but still a pleasant historical romance.

The Soldier’s Rebel Lover (story #2 of the Comrades In Arms series) is a Regency romance. This story is mainly set in Spain and begins in 1813 during the Napoleonic Wars.

Finley Urquhart is on a reconnaissance mission when he meets a member of a partisan group. Shocked to find it’s a woman, he’s impressed when she eventually discloses her link to the famed rebel known as The Ghost or El Fantasma.

Two years later, the war is over, but loose ends need tying. El Fantasma is a thorn in Spain’s side; he speaks out against the elite rulers and King Ferdinand wants him silenced. Word of the crackdown on former partisans has reached England. The Duke of Wellington is concerned about the sensitive information that the rebel leader might leak, if captured. He too wants El Fantasma silenced.

Finley is sent back to Spain. He starts his search by following leads to the rebel woman he met. When he does find her, he’s shocked by the secrets she keeps, but the pair must move fast as the Spaniards are hot on their trail.

There’s a lovely Spanish vineyard setting for much of this story of romance and rebellion. A solid second book in this series.

Which will it be hero or rebel?

If only Jack Trestain could easily put aside the tortured memories he carries deep within… Perhaps Celeste Marmion might be the distraction he so desperately craves? With Celeste’s every touch an exquisite temptation, how close can Jack get without revealing his darkest secret of all?

Two years after they first met Finlay Urquhart has one final duty to perform for his country – one that reunites him with Isabella Romero! Isabella is now a woman filled with secrets, ones she can’t let him uncover. But soon she finds herself letting her guard down… one scorching kiss at a time!

This Rags-To-Riches Contessa is a Regency era romance set in Venice.

It opens in the infamous streets of The Rookery of St. Giles’, London; a dangerous place. A woman known as The Procurer has been asked to employ a woman with both acting and card-sharp skills.

Becky Wickes is hiding from the authorities after a public scandal where she was accused of fleecing a minor member of the Royal family. If she’s caught, she’ll be hanged. So when The Procurer offers her the chance of escape, she gladly takes the job.

Luca del Pietro wants Becky to make a man destitute; a man who murdered his father. By day she’ll be pale, shy cousin Rebecca, but by night she’ll be disguised as the mysterious card player, The Queen Of Coins.

The book has a colourful and opulent setting. Luca wants Becky to play cards during the weeks of Carnevale, when Venice is alive with masks, costumes and when gambling is allowed. I really enjoyed all the descriptions of Venice and its society, particularly the waterways, palaces and the idea of rooftop gardens in a city of water. This was a refreshing scenery change to other books I’ve read in this genre. Recommended to readers who enjoy historical romance.

A Matches Made in Scandal story: To catch his father’s murderer, broodingly arrogant Conte Luca del Pietro requires help from a most unlikely source—Becky Wickes, London’s finest card-sharp. Against the decadence of Carnival, Becky’s innocence and warmth captivates Luca, but as their chemistry burns hotter the stakes in their perilous game are getting higher. For Luca is no longer playing only for justice—but also to win Becky’s heart…