The Earl She Should Never Desire by Lara Temple

The Earl She Should Never Desire is a Regency romance set in London. Lily Walsh is a widow living in Birmingham; her younger sister begs her to travel to London to spend a few summer weeks with her. Anne is engaged to be married and Lily is delighted for her, but she wonders if Anne is truly happy.

Lord Sherbourne is pleased to meet Anne’s sister after hearing much about her, but she isn’t the person he had imagined. It troubles him that he feels more drawn to Lily than Anne, but he’s a man of honour and he can’t back out of the wedding now.

I enjoyed getting to know Lily and finding that she had a passionate side under her practical dresses. The author has done a fine job of creating the sisters as opposites. Outwardly Anne is the pretty one who has been groomed to be a society wife. Lily is the black sheep, the one her mother finds a disappointment. I wasn’t sure how the story would work out at the half-way mark, but I was very keen to keep turning the pages to find out. Lily has a troubled past that she must work through and she needs a friend who she can trust to be there for her at all times. The little fears which kept popping up were understandable and I particularly liked the final setting; it felt very appropriate. A great story and a wonderful set of characters.

Lara Temple offers you a taste of the forbidden in this sexy Regency romance.

War widow Lily Walsh has left her aristocratic family behind, but she can’t deny her younger sister’s request to come to London to meet her fiancé. Though not a love match, Lord Sherbourne is kind, amusing and ideal for her sister on paper. But as Lily gets to know him, she’s finding him alarmingly attractive! And the forbidden look in the earl’s eye shows the feeling is mutual…

A Match for the Rebellious Earl by Lara Temple

A Match For The Rebellious Earl is book two of the Return Of The Rogues series of historical romances. It can easily be read as a stand-alone story.

Kit Carrington reluctantly returns from his time at sea to complete his duties as the new Lord Westford. Although he returned to England specifically to attend the wedding of his step-sister, he knows that he must face the challenges of his inheritance.

Genevieve (Genny) Maitland is on a mission to help her widowed sister find a new husband so that she can get away from harridan Lady Westford, Kit’s grandmother. Lady Westford’s one purpose is to make sure that one of her grandsons produces an heir; so far she has been disappointed.

An ambitious plan to fix all of their problems is agreed between Genny and Kit, but its execution means plenty of twists and bumps in the road—will they be successful?

This story opens with the introduction of quite a few characters and it took me a couple of chapters to get them all straight in my head. After a while they became more three dimensional, and I began to enjoy the story. I was intrigued by Kit’s life as a sailor and the many treasures that he had collected. I was also interested in Genny’s younger years when she lived with her Grandfather in Spain. Genny is a strong leader and her organisational skills and negotiation aptitudes were superb.

Overall, a good story and I enjoyed it once the story and characters became fixed in my mind.

Now, he’s back in Society’s ballrooms!

Miss Genevieve Maitland needs his help to find an eligible match for her sister but assumes he’ll be reluctant to help the family that rejected him. Yet after one spine tingling waltz with Kit, sensible Genny finds he’s not her opponent—but a very tempting ally…! 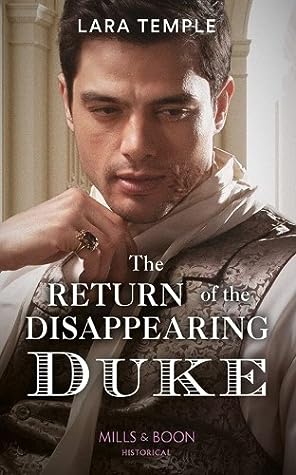