The Girl with the Silver Clasp by Juliet Greenwood

The Girl With The Silver Clasp is historical fiction set in a small coastal village near St. Ives in Cornwall.

The story begins just before World War One and introduces us firstly to Jess, the daughter of the harbour master, who spends much of her time at the local forge. Here she learns the art of blacksmithing as well as the intricate metalwork skills needed to make and repair jewellery.

Secondly we are introduced to Rachel, who is the daughter of the family who own the harbour; during the war Rachel goes to France to drive an ambulance, but after the war her family’s fortunes change

In the post-war years, Jess is forced to help her aunt with dressmaking, but it is the metalwork which still calls to her and Jess squeezes in as many hours as she can, creating unique pieces of jewellery

This is the story of women who embraced the post-war changes in society; they made their own decisions and worked for themselves supporting each other’s efforts. Although this book started slow, once we reached the post war years I became fully engaged with the lives of Jess and Rachel and really enjoyed the remainder of their stories. Some of my favourite parts were reading about life in London as well as the growth of the artists in the St. Ives area.

Jess Morgan always hoped to become a celebrated silversmith, but when the men return from war she’s forced to return to her job as a seamstress. All she can cling to is the memory of that delicate, unique silver clasp she created for a society bride.

Rachel Bellamy served as an ambulance driver on the front line during the Great War but now it’s up to her to save the family home and picturesque harbour from her wealthy brother-in-law, before it’s too late.

Giselle Harding fought her way up from poverty to become a Hollywood movie star. Yet even the most beautiful jewels she owns will never fill replace the man she lost.

As the lives of the three women collide, will they be able to overcome their differences and fight together for the dreams they once held so close?

The Ferryman’s Daughter by Juliet Greenwood

The Ferryman’s Daughter is an historical family saga set in Cornwall. The story begins in 1908 and focuses on Hester Pearce and her dreams to run a café. Her father rows passengers across the Hayle estuary near St Ives, while her mother keeps the house and uses her cooking skills to create preserves which she sells.

When Hester’s mother dies and her father is badly injured in an accident, Hester is forced to leave school, then take charge of the ferry herself. However, she is determined to make more of her life, so she learns to cook and bake. When World War One breaks out, Hester finds employment in a local house where soldiers are sent to recover; here she puts her resourceful cooking skills to good use.

I enjoyed the Cornish setting of this book, while the parts set during the war were some of my favourites, especially the creative ingredients used during times of shortages. I also liked the parts set in the gardens; I wanted to take part in digging and harvesting of the fruit and vegetables alongside the characters. Overall, a lovely story about a practical young woman and her ambitions to make a living for herself in a period of history when many women traditionally looked after the home.

Can Hester help her family escape desperate poverty and fulfil her dreams?

1908: Hester always loved her mother best, her father had always been a hard man to like, spending more time (and money) in the local than with his family. After her mother’s sudden death, followed by an injury forcing her father to give up his job as the ferryman, Hester is placed in the position of care-giver for her young brother and sister.

As the years pass Hester must row the ferry night and day to keep them all from starvation, while her hopes of working in a kitchen and one day becoming a cook, slip further and further away.

But just how far is Hester willing to go to make her dream a reality? And as the threat of war comes ever closer to the Cornish coast, will it bring opportunities or despair for Hester and her family? 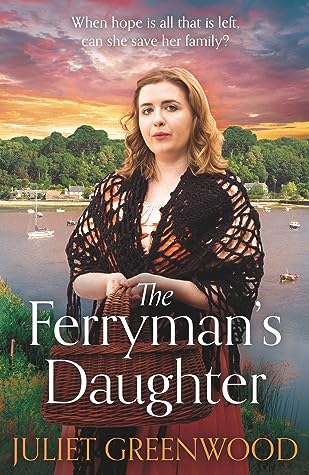