Privateers is a fast-paced action thriller. The main story is set in the Caribbean and revolves around the search for a hoard of lost gold which was stolen during World War One.

Bill Owens owns a racehorse, an ice hockey team―and a lot of money to a Chicago thug. He becomes entangled in a treasure hunt which might solve his financial problems but at what cost? For he is forced to return to Haiti, a country that holds dark memories for him.

I was looking forward to this story; a daring high risk modern day pirate-style adventure, with three main time settings: 1986, 2006 and 2009, while the Haiti setting and the hints of Voodoo intrigued me.  I liked the inclusion of the hurricane as it provided an exciting background for much of the high-speed action, adding another layer of fear and danger for the characters during the hunt.

The author chose to use present tense throughout, including when switching to an alternative character’s point of view and returning to past events. The story would have worked better for me if different tenses had been used at these times; the writing would have been more interesting and the story easier to follow with a defined change.

Bill was quite a charmer, even when a few scenes and situations required me to suspend my disbelief for the sake of the story. The main female characters were less promising as they were portrayed as Amazonian type pin-ups and rather stereotyped with ‘Bond Girl’ references, which was a shame because it dated the writing and might close it off to a wider audience.

While the action was fun, I became irritated by the constant mentioning of famous people, films and brands as they became tedious and felt contrived. The treasure hunt for the gold was good but lengthy and although I enjoyed the chase, I was never convinced about the quantity of clues; however, that’s just my personal take. As a side note, the author includes lots of hand-written style images of the clues, which I’m sure work well in the paperback form of this book, but I found them very hard to read on my kindle.

Overall, I liked the idea of this book, but I thought that it needed more work, particularly in the areas mentioned above for today’s reader.

WWI rages. U.S. Marines storm Haiti’s Banque Nationale, loot $26 million in gold, then vanish . A century later, clues surface during the demolition of a Chicago racetrack, pointing to the Corazón Santo—the malevolent triangle of Havana, Kingston, and Port-au-Prince. Three fierce, vibrant women reunite to hunt the treasure, hoping it will buy their survival from past entanglements. They conscript a streetwise Chicago horseplayer’s help, then risk a return into the blood-drenched Caribbean jungle that has tried to kill them before. The uneasy partners are quickly swallowed in a terrifying labyrinth of shadow government and modern-day piracy where a final choice will be forced upon them: gold, survival, or redemption? 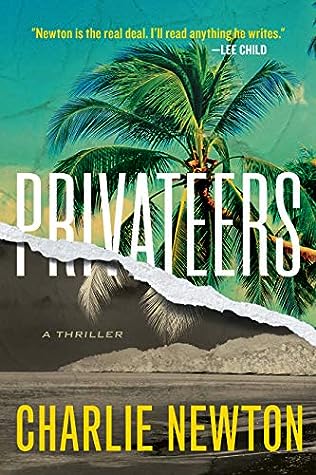