Brittany has been reading Gone: Catastrophe In Paradise by Obelia Modjeska 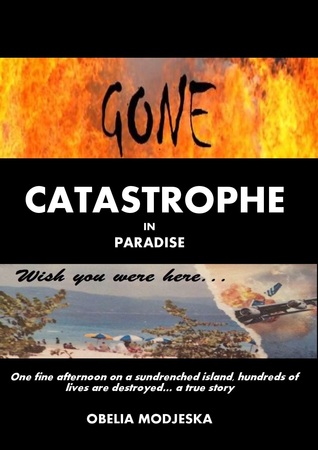 Gone: Catastrophe in Paradise by OJ Modjeska is the true story of the deadliest aviation accident in history. In 1977, the main airport in the Canary Islands was bombed by a separatist group seeking independence from Spain.  When the threat of another bombing occurred, the decision was made to divert all air traffic to Los Rodeos, a small regional airport on a different nearby island. Los Rodeos was understaffed and ill equipped to handle the influx of planes.  The events leading up to this catastrophe are explored and presented to the reader with an overwhelming sense of dread, like watching the chaotic elements of the universe come together to form a terrible evil. The result was the Tenerife Airport Disaster which killed 583 people, making it the deadliest accident in aviation history.

Under 100 pages in length, Gone: Catastrophe in Paradise focuses on the topic of examining how events came together to result in the Tenerife Airport Disaster, and the author’s attention is not diverted. Modjeska provides a thorough and succinct examination. She has a methodical approach to her research and provides images and diagrams to support her writing.  Transcripts between pilots and air traffic control to support an examination of the key players in the disaster.  The writing goes beyond a straight narration of events and attempts to understand the perspectives of the pilots, crews and air traffic control.  Modjeska takes the reader from what appears to be a possible terror threat from the Canary Islands Independence Movement, to language barriers between pilots and airport staff, possibly worst-ever timed chance radio glitches, a lack of standardized aviation terms, and terrible weather conditions.  In this brief book, Modjeska particularly excels in creating a mounting sense of doom and dread.  I was on the edge of my seat despite obviously knowing how the story ended.   It was the same type of suspense that comes from reading a horror novel.

Because the accident happen on a Spanish territory, Spain managed the accident investigation. The investigation concluded that the fundamental cause of the accident was that Dutch KLM Captain Veldhuyzen van Zanten took off without clearance. The Dutch authorities were reluctant to accept the Spanish report blaming the KLM captain for the accident, and Modjeska provides a balanced perspective of why blame deserves to be shared with chance and all those involved.

I received this book through Rosie’s Book Review Team

A mass of European and American tourists descend on an idyllic tropical island for the holiday of a lifetime. Within hours, hundreds are dead. What happened? The true story of one of history’s most tragic and shocking disasters…in which aviation, terrorism, a sudden change in the weather and plain old bad luck made for a ruinous mix. This gripping novella length work unravels the mind-boggling facts of this catastrophe as a compelling, action-packed and haunting tale of the human condition that will have you turning the pages to the very end.

OJ Modjeska is a criminologist, historian, blogger and author. She graduated from the University of Sydney with a PhD in Modern American History in 2004, and received her Graduate Diploma in Criminology from Sydney Law School in 2015. In 2015 she was awarded the JH McClemens Memorial Prize by Sydney Law School for her scholarship in criminology. Before pursuing a writing career she worked for many years as a legal writer and editor. OJ runs a blog about narcissism, psychopathy, politics and culture. She writes books of narrative non-fiction true crime and disaster analysis. Her books are suspenseful narratives which draw on her insights and expertise into history, criminal behaviour and psychology. British crime author Pat McDonald writes: “fascinating reading and exceptional writing”.