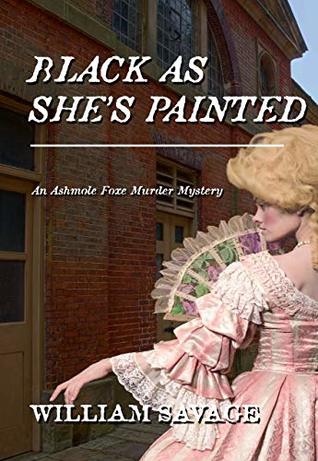 Black as She’s Painted is the fifth book in the Ashmole Foxe Mysteries series by William Savage.  His other series is the Dr. Adam Bascom Mysteries and both are set in Georgian England, in and around Norwich. I will be honest and reveal I am a huge fan of William Savage and have enjoyed both of these mystery series. However, even though I come from a medical background, the Ashmole Foxe books are slight favorites, possibly because of the charismatic, unconventional and quirky protagonist.

Ashmole Foxe is a bookseller with his own shop, run largely and profitably for him by an entrepreneurial widow, Mrs. Crombie. Foxe is a dandy and an unrepentant hedonist, a lover of beautiful women in his bed, fine wine and a surfeit of good food, but despite all these social faults, he has solved several other mysteries for Norwich’s political and mercantile elite. Thus it is natural for him to be approached for assistance when a rich goldsmith turned banker Samuel Mellanus goes missing. Almost immediately there is further news: the banker’s wife, who has a promiscuous reputation, has been found naked and strangled to death in her own bed.

A group of politicians/merchants need Foxe to find Mellanus, since having a missing banker is catastrophic for a bank and its money, but they also need him to discover how thousands of pounds have been stolen from the bank, without anyone noticing they were missing…until now. Add to this conundrum is the fact that Mellanus had closed his gold smithing business for no apparent reason, letting all his workers go, and Foxe discovers that coins and jewelry were taken from Mr. and Mrs. Mellanus by their pretty maid Maria.

Can Foxe find Mellanus and the missing money? Was Eleanor Mellanus as black as she was painted, or was it simply her misfortune to be both desirable and dumb, used and betrayed by the men she welcomed to her bed?

To solve these crimes, Foxe will use his considerable investigative powers and intellect, plus the help of characters introduced in previous books: a motley crew of street children, Mistress Tabby – a so-called Cunning Woman or folk healer, who practices folk medicine and magic, and a sea captain, Captain Brock, who has just returned from his honeymoon.

As usual, the author wraps the solution to these crimes in layer upon layer of hard- won information, much of it not useful at the time of its uncovering, plus a number of tangential crimes. Also as usual, the reader learns a great deal about specific aspects of Georgian life. In each book one of these aspects is a focal point, in this case coinage and banking.

William Savage is a living compendium of Georgian life, and he creates a world into which the reader is absorbed, alternatively colorful and dangerous, and populated by characters that become real. Over the series, I have come to look forward to the reappearance of many of them, interested in how their lives are evolving, as they most certainly do.

I was not disappointed by the tangled ball of yarn created by the author to be unwound by Ashmole Foxe. The pacing of this mystery series is slow, in keeping with life in Georgian England, and is something I have learned to enjoy. It allows the reader to savor the story.

If I had one criticism, it is the length of time it takes to get to the mystery. There is always a period of introduction at the beginning of the Foxe stories but this one was long enough to be on the tedious side.

I was also disappointed that the changes in Foxe’s life in the last book – his turn to more sedate attire and true consideration of the women in his life – were not evident in this one. Can this man go on forever in his present state? Will age catch up with him? I guess I will have to wait for the next book to find out.

In any event, as always, I strongly recommend this latest Ashmole Foxe adventure to anyone who likes historical mysteries and to anyone who might!