Today’s Team Review is from Judith, she blogs at http://judithbarrowblog.com/

Judith has been reading Bittersweet Flight by Anne L Harvey 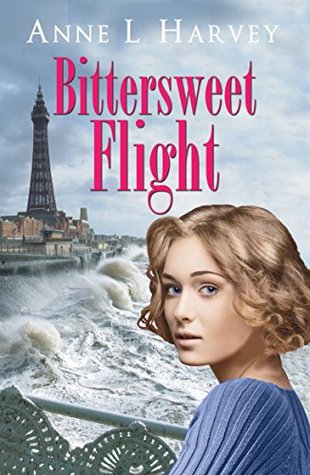 Before I begin my review I would like to say I wonder if the Blurb gives away too much of the story?

I enjoyed reading Anne Harvey’s Bittersweet Flight;  the  sequel to her début novel A Suitable Young Man. The story follows Sally Simcox as she leaves her home town of Horwich in Lancashire to move to Blackpool.

Although it can be read as a stand-alone book I would recommend reading A Suitable Young Man first.

Set in a decade I have studied and loved Bittersweet Flight begins in 1956. It is obvious from the descriptions of both the Northern industrial town and the seaside resort that the author has researched both the places and the era. There is a great sense of place throughout the story.

Told from an omniscient narrator’s point of view we meet all the characters from the first novel and are introduced to some new ones. All add to the plot which moves smoothly and steadily throughout most of the novel. although there is an unexpected revelation towards the end which adds another layer to the book.

The reader gains more insight to Sally in Bittersweet Flight; I think she is actually portrayed as a more rounded  character in this novel as she struggles to regain control of her life. The introduction of  Phil Roberts adds a complication but I liked the way the author introduced the character and linked him to the protagonist’s back-story.

On the whole the dialogue is good and easy to follow and can be identified with each character. Although occasionally stilted it’s not enough to detract from the enjoyment of the book.

There is the minor plot-line threaded throughout the main plot, of Joyce Roberts and her secret boyfriend, Dave. Through this minor storyline we learn more of the life the protagonist has left behind and the correlation with her present situation.

Anne Harvey has a writing style that is very readable. I have no hesitation to recommending  Bittersweet Flight to any reader who enjoys a family saga

Terry has been reading Bittersweet Flight by Anne Harvey

This is the sequel to A Suitable Young Man, and the two thread together well; it could possibly be read as a standalone. It starts in 1956, when Sally Simcox has run away from her home in Horwich, Lancs to Blackpool, because she is pregnant.   The father is Nick, with whom she had a one night stand after having liked him for a long time; he offered to marry her out of duty, but Sally knew he loved another, so pretended she’d had a miscarriage to let him off the hook.

Once in Blackpool she meets Phil, who is in the RAF, and he helps her find a job and somewhere to live; there is an immediate attraction between them. Alas, Phil is unaware that Sally has a connection to his family—and he already has a girlfriend, Pam, who is in love with him and hopes they will marry.

It being the late 1950s, Sally has to go into a mother and baby home. I thought this bit was very interesting, mostly because it shows the difference in attitudes between then and now. When I was in my teens, having a baby out of wedlock was still seen as a fairly shameful thing, but this is the generation before, when to be an unmarried mother could ruin a girl’s life.

Running alongside the main story is that of Joyce, Phil’s young sister, which is connected to Sally’s situation.

The book is very readable, certainly enough to keep me turning the pages because I wanted to know what happened, although I found it information heavy in parts; at times the dialogue was a little unrealistic. Near the end there is a revelation of sexual deviance which examined the darker side of working class life in those days, and an explicit sex scene, the latter of which I found incompatible with the otherwise ‘clean read’ tone of the book; it kind of jumped out and made me go ‘woah, what happened there?’ Aside from this, though, I would say that the many readers of nostalgia/family dramas will enjoy this book, as it’s a basically good story, and well plotted. Sally is real and likeable, and Phil’s dilemma very believable (though I thought Pam’s character and reactions could have been developed more).   There is plenty of day to day detail about life during the 1950s, too, that will appeal to this market.

Bittersweet Flight by Anne Harvey
My rating: 4 of 5 stars

Bittersweet Flight is book #2 of a family saga involving the Roberts and Simcox families from Horwich, near Bolton. Book 1# A Suitable Young Man began the tale. Bittersweet Flight takes on the story of Sally Simcox and Joyce Roberts and can be read as a stand alone, but to get the most from the story I suggest reading A Suitable Young Man first. Both books are set in the 1950’s.

Sally Simcox fled to Blackpool away from a one sided love interest and taking with her a personal secret, just off the train she is knocked over and rescued by an RAF serviceman. He takes her to a nearby café to get over the shock and introduces himself as Phil Roberts.

Finding herself sharing a cuppa with the brother of the fellow she’s running from, makes Sally flee. She finds a job as a chambermaid and soon gets invited to a dance at the local RAF camp. She meets Phil again and a friendship begins to form although Phil already has a girlfriend.

Back in Horwich Joyce Roberts, Phil’s young sister is struggling with her parents ban on seeing older boy Dave Yates, very much in love they discuss the idea of eloping. They meet up in secret but Joyce is hounded by bully boy Jud Simcox who lives out his image as a thug when he beats up Dave.

In Blackpool, Phil and Sally’s friendship is tested by Sally’s big secret, but she finds support from Betty and Bob who run a B&B and offer her a job when she needs it.

Lots of nostalgia from the era from Teddy Boys to the Suez Crisis. A good read for those who enjoy a historical based Family Saga.