Cathy has been reading Bella Toscana by Nanette Littlestone 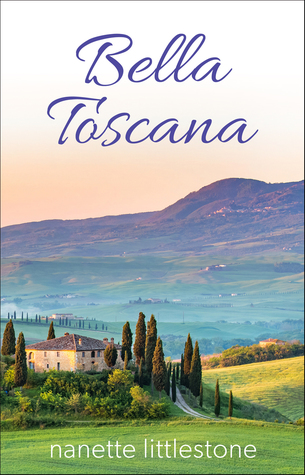 Toscana Blake has an organised, if not perfect, life. She’s content in her marriage to Jackson. Acknowledging the fact it may not be a passionate union, Toscana feels a deep affection for her husband and appreciates the life they have. The only stumbling block is the future of Dolcielo, her bakery business. Much is riding on her visit to the Chocolate Festival in Rome and whether it can open doors for her and her delicious sounding chocolate brownies. Regardless of that, she’s looking forward to seeing her much loved aunt and uncle.

Before the trip though, she and Jackson celebrate her fiftieth birthday at a favourite Italian restaurant. That night Toscana has a disturbing and vivid dream of an unknown lover. Then at the last moment Jackson is unable to make the trip to Rome due to work related issues, so after some deliberation and urging from Jackson and her best friend, Toscana decides to go alone.

While wandering through the streets, after checking into her hotel and having a restorative nap, Toscana stops to look at the ruins of the Temple of Vesta. It’s there that the visions start in earnest.

A chance meeting sets Toscana on a path of discovery. Her ordered life is thrown into chaos and uncertainty. Toscana’s struggle between following her head or heart was realistically portrayed—it’s a choice between staying with the familiar and comfortable or taking a leap of faith into the unknown.

The fascinating historical details and wonderful descriptions of a past and present Rome (not to mention the food—lots of it!) conjure vivid imagery and a strong sense of culture and place, added to by the picturesque representation of the Italian countryside. I enjoyed the themes of reincarnation and spirituality and how they were the foundation and heart of the story. The past life flashbacks and present were woven together as Toscana finds herself on an unexpectedly challenging journey, one of serious consideration, possibilities and potential.

I didn’t realise until after I’d read it that this is a sequel, but it can easily be read as a stand alone.

On the night of her fiftieth birthday, the comfortable ride of Toscana’s life takes an alarming plunge. Haunted by seductive visions, she tries to push aside the desire and focus on the husband who adores her. Then she falls for Flynn, a younger man with an eye for adventure and a heart full of romance, who leaves her doubting everything she’s believed about love and passion.

In Atlanta, Rome, and the lush scenery of Tuscany, Toscana searches for answers to the mysteries of her life while she faces her biggest question. If she listens to her feelings will she lose everything she holds dear, or does her heart hold the key to love and joy?