Liz has been reading Voyager by Carl Rackman 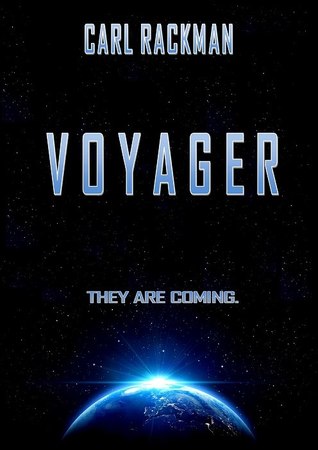 This style of novel is not my usual choice of genre but it’s always good to try entering a new environment and adapt to a faster paced narrative. And I am really glad I chose Carl Rackman’s second book.

From the Prologue when Brad talks to his fiancé by phone as she tries to escape from the second tower on 9/11 to the culmination of this thriller on the day of the Inauguration of a new President in 2017, this fast-moving thriller keeps you guessing. There are a number of significant characters to meet, including Brad, a member of an FBI counter-terrorism unit, Dr Callie Woolf, Project Manager of the Voyager Interstellar Mission and Matt, a British pilot who freelances for MI5. Brad soon finds himself in disgrace, Callie fears her project will be cancelled and Matt may lose his freedom.

The plot is complex and offers “alternative facts” and there are acronyms and details of the workings of NASA and US Security staff to come to grips with. The characters gradually fill out into believable personalities and each of them becomes increasingly endangered. And then we meet Mirage, a mysterious superwoman. Is she good or evil? Is the world about to be invaded by creatures from another world, or is there a conspiracy? This tautly constructed suspense novel kept me turning the pages and hoping that Brad and Callie would solve the mystery and survive all attempts on their lives.

Voyager One. A tiny probe hurtling through the void of outer space more than twelve billion miles from Earth, it is the remotest human object in existence. Callie Woolf, Voyager Project Manager at NASA’s Jet Propulsion Laboratory, is stunned when the probe unexpectedly downloads a series of increasingly disturbing images.
Within 24 hours, she is running for her life.
Brad Barnes, a conflicted FBI agent assigned to the case, soon uncovers a deadly plot that could change the balance of power on Earth and bring the United States to its knees. He must fight for survival in a race against time to defeat the conspirators, and confront a potentially explosive reality: that mankind may not be alone in the universe.
Voyager is an action-packed conspiracy thriller by Carl Rackman.