Jenny has been reading A Single Journey by Frankie McGowan 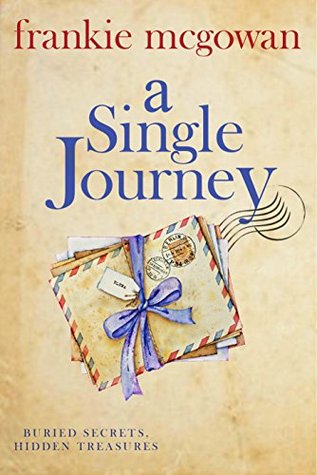 The characters in this book are all completely different to one another, which makes the story interesting.  I enjoyed the way that the book begins in Berlin 1933 with a rather complex story that you need to take your time over, really get the feel of what the story is about…. its beginning.  Then it moves on to modern day Pimlico and Harriet with her jewelry stall.

This is a slow paced read; you need to concentrate on what is going on to fully digest the feel and importance of how the past merges with the present. The story was a little confusing at times for me, and I found myself reading some paragraphs over and over to realize fully what was happening in the story.  I did not like that aspect of the read.

The story itself though, is very good and has twists and turns, excitement and fear with a little romance thrown in for good measure. I think that the relationship between Harriet and Neil could have moved at a better pace and had more substance, especially in the final chapter. The author has done a lot of research to get her history and facts right for the story, that shows, and works well making the book quite compelling at times.

There is a lot going on in the book. If you were looking for a complex read, then I would recommend this, but if you want an easy read, then it would not be for you.

Harriet has begun to despair of her life.

With a failed relationship behind her, a business on the rocks and a flat that’s falling apart around her ears, she could really use some luck.

Elena Banbury, née Guseva, an elderly but imposing Russian woman who is Harriet’s neighbour and landlady, frequently entertains the punters at Harriet’s jewellery stall with tales of the palaces of St. Petersburg and the treasures of Fabergé. But Harriet sometimes feels, guiltily, that she could do without the endless errands that seem to fall to her as Elena’s friend.

Then, unexpectedly, when Elena dies, she leaves all her worldly goods to a grateful Harriet. In time, however, it becomes clear that others are shocked by Harriet’s good luck, too. Shocked… and very, very unhappy.

Challenged in court by Elena’s family who live in Berlin, Harriet is forced to give up her inheritance and long-dreamed-of plans for a new business, and start her life again. But with her reputation in tatters and the memory of Elena tainted, Harriet knows a great injustice has been done.

Against the advice of her friends, family and lawyers, Harriet sets off on her own, very singular journey to Berlin.

She knows she has to fight for justice. But, when she meets the scholarly, perceptive Neil, who generously tries to help Harriet in her mission, but who is struggling with a complicated marriage, she must also decide if she’ll fight for love, too.