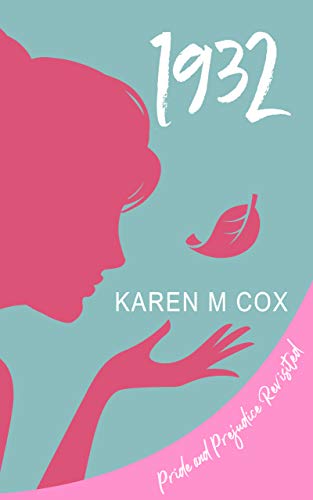 Olga has been reading 1932: Pride And Prejudice Revisited by Karen M. Cox

I have read several novels, short-stories, and novellas written by Karen M. Cox, many of them variations of Jane Austen’s novels or inspired by them, most recently Find Wonder in All Things, and like that one, 1932 is a new edition of a novel the author published a few years back. As I hadn’t read it before, I was grateful to get an ARC copy, which I freely decided to review.  It is not necessary to have read Pride and Prejudice to enjoy this book, but because in this case I am much more familiar with the original, I can confirm that there is much to enjoy from comparing the —sometimes subtle and at others quite major— differences between the two and I thought the new setting suits it very well.

The story is narrated in the third person mostly from Elizabeth’s point of view, but also at times we see William Darcy’s viewpoint, and we get a much better understanding of how the feelings between them, especially when it comes to Elizabeth, develop. I think the historical period works very well to explain the changed circumstances for the Bennet family, who until then had lived a comfortable life in Chicago, but due to the Depression find themselves in a tight spot when Dr Bennet loses his teaching position at the university and is unable to find a job that will feed the seven mouths under his charge. The whole family gets uprooted to a small farm in rural Kentucky, and the rather desperate circumstances have a deep effect on Elizabeth’s ideas and decisions. Do not worry, there are pride and prejudices aplenty, but there are major changes in respect of the original novel, although I’ll keep my mouth shut so you can discover them yourselves if you are a fan, or enjoy this version without spoilers if you haven’t read P&P before.

The author has a great skill, as I have mentioned before, at making any historical period come to life, and we are immersed into the Thirties in rural Kentucky as we read, without being overwhelmed by lengthy descriptions and tonnes of unnecessary details. Characters behave according to the era and to their social positions, while at the same time remaining faithful to the spirit of the original.

If I had to name one of the things I enjoyed the most, was the increased role played by some of the secondary characters, like the girls aunt and uncle, who offer them their help; Georgiana (whose new version of the story and how that affects Darcy’s character I loved in particular); Fitzwilliam (he’s a sheriff!); and also the subtle changes to some others, like Mrs Bennet, Elizabeth’s mother, who although loud and overbearing at times, also shows more backbone and her true devotion as a mother, which I found endearing. And there are some new characters that I love, but no, I won’t tell you about them.

Are there changes to the main couple? Well, yes, although they also retain the main qualities devoted fans love. Elizabeth is strong and determined, but seems more willing to put other people’s needs (especially her family’s) before her own convictions and is more practical. We also see her try to behave as is expected of her; she doubts and questions her decisions and wakes to the pleasures of love. (As I’ve often said, I’m not a big fan of sex scenes or erotica but must admit the very early scenes here are quite sweet and funny, and they are far from extreme or too graphic, but I thought I’d better warn you). Darcy shows his pride and his prejudices too, especially at the beginning of the novel, and he finds it difficult to fully trust Elizabeth, although we get to understand why as the story advances.  I don’t want to reveal too many details of the plot, especially where it differs from the original, but I should mention that we do get to see more of the relationship between Elizabeth and Darcy, rather than only the early period of courtship, in this version.

Do not worry, we still have the witty dialogue, a baddy true to form, and there is an action scene that sets many things in motion and I thoroughly enjoyed. The writing flows easily, and it manages to plunge readers into the subtleties of the minds of the characters whilst at the same time sharing with them the landscapes and the settings. And yes, there is a happy ending.

Here, a taster of the writing, but, as usual, I’d recommend readers to check a sample to see what they think:

Here, we have the couple conversing.

“You seem to have a great faith in your judgement.”

“I suppose I do. I believe I’ve lived a sufficient amount of time and seen enough of the world to earn that confidence.”

“Of course not. That would be impossible for anyone.”

“But I do make it a priority to weigh my decisions carefully. For example, I didn’t build Pemberley by following the latest fads in agriculture without thinking them through.”

“My understanding was that you didn’t build Pemberley. It was left to you, was it not?”

I recommend this novel to lovers of classical or historical romance, especially those fond of Jane Austen, and to anybody who enjoys a well-written story full of compelling characters. Fans of the author won’t be disappointed, and I was particularly touched by her dedication of the novel to her grandmothers, women who had lived through that historical period and had plenty to say and lots to teach future generations. And I’m sure Austen would approve.